Lost balls! The end is nigh! 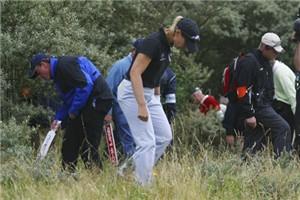 If it makes you feel better, the latest research tells us that golfers globally lose half a million golf balls every 12 months and that's an average of four lost every 18 holes.

And you think you're a rubbish golfer!

The reason I reveal these worrying statistics is that a Dutch company claims it has solved the problem of balls lost in the rough, in the trees, in a hazard, even out of bounds by inventing a ball and device combination that will keep a golf ball in your possession as if on a string!

Golfers are often criticised for slow play and taking too long to complete a round - indeed it's also claimed that on average we spend 30 minutes a round searching for our golf balls - but the Prazza Golf ball finder set aims put an end to all that - and speed up play!

The set, priced at £329 - that's (gulp!) £329 - features a Prazza Tracker handset and two Prazza distance golf balls, each containing a microchip which enable the golfer to locate the ball from up to 100 metres. A sleeve of three Prazza golf balls, available separately, costs £39.95 (compared to a dozen Titleist ProV1 at around £40, which admittedly, are loseable).

Roughly the same size as a smart phone, the handset uses 'Active Radio-Frequency Identification' (RFID) to track the Prazza ball, then bleeps or vibrates with increasing excitement as the golfer nears the ball. A visual display then guides the golfer in the right direction.

The micro-chip in the ball is activated when the golfer hits the shot and the signal remains active for 30 minutes after each impact with handset and ball in continuous contact with each other throughout the round.

So is it legal, you ask? Surely when you've duck-hooked your final tee shot in the monthly medal into the deep doo-doo, you can't just whip out your Prazza and go hunting?

Well no, you can't. Prazza admits that while the balls themselves might conform to the Rules of Golf in competition play, where handicaps can be adjusted, the combination of ball and device does not...yet!

However, with VAT set to increase to 20 per-cent on golf equipment in January, membership fees at struggling courses expected to increase and the government looking for ways to economise in the way we live our lives, the Prazza finder set may yet prove a good investment.

Says the company's boss John van Driel: “Who hasn’t been frustrated by golf balls which seemingly vanish into thin air? And it’s expensive to always be losing golf balls. We reckon golfers will play faster and score better using the Prazza ball finder. We also believe beginners will learn the game more quickly – and with less fear.”

It's an interesting debate but I'm not so sure Prazza technology has all the answers. However, it might encourage a few more of us to seek a lesson from our local PGA pro to help hit the ball straighter and keep out of the jungle the Dutchmen seem so keen for us to find.