Odyssey rolls out Versa putters for 2013 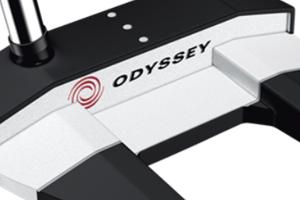 Odyssey has announced a January 25 launch of its Versa putters, which feature a visionary High Contrast Alignment system.

Versa putters feature stark black and white contrast laterally on the putter head, which accentuates the face angle at address, through the stroke and at impact. This contrast prompts golfers to better align putts and improve their chances of holing out in the ten to 15-foot scoring zone.

The design also promotes concentration during the putter stroke and helps maintain consistency at impact. Alignment features are traditionally applied to mallet and progressive style putters. However, Versa provides a high contrast functional alignment aid to a conventional style putter.

“We set out to design a distinctive and highly effective alignment system for a blade putter,” said Odyssey Golf principal designer Austie Rollinson. “The human visual system is both sensitive to contrast and very good at complex tasks such as edge detection. We utilised both of these skills to create a very effective alignment aid that helps golfers putt more consistently, and sink more putts, too.”

The Versa line of putters also debuts an improved White Hot insert that has been meticulously engineered by Odyssey for more consistent sound, feel and performance across the striking surface. A new laser milling cutting process allows Odyssey to achieve extremely tight tolerances and to better match insert shapes to the 343 gram head shapes, resulting in more consistency and better performance for golfers.

The Versa line will retail at £119 and will be offered in a variety of Tour-proven head shapes from the brand’s progressive style and mallet putters to conventional blade style putters. The #1, #2, #7 and #9 models are available in black/white/black and white/black/white, while the #7 90 models feature a front-to-back alignment visual.

Click through the images below for a closer look at the Versa line of putters.

What do you make of the new Odyssey Versa putters? Tell us about it in the forum and on our Facebook page. You can also tweet us @Golfmagic.