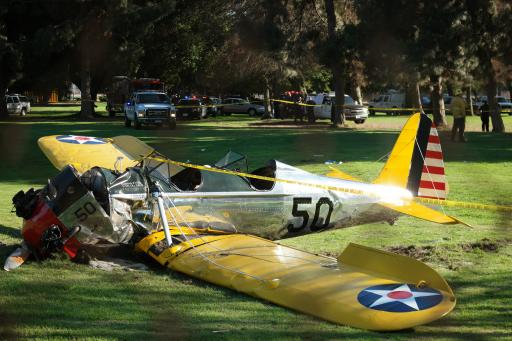 Film star Harrison Ford has been injured after crash-landing his vintage plane on a Los Angeles golf course.

Ford was conscious when medics arrived and rushed to hospital in a "fair to moderate" condition, a fire department spokesman said.

His son Ben, a chef in Los Angeles, later tweeted from the hospital: "Dad is OK. Battered but OK!”

His publicist said: "The injuries sustained are not life threatening, and he is expected to make a full recovery."

Rory McIlroy admits he is cheesed off with his recent form after missing the cut at the Honda Classic and starting slowly in the WGC event at Doral.

The world number one is struggling to recapture the scintillating form that brought two majors in 2014 and another victory and a runner-spot at the start of this season.

“I don't feel like it's that far away,” said McIlroy, who took several weeks off to fight a court case in Dublin. “That's the frustrating thing. It is very good on the range and it is very good when I'm not playing a tournament.  Then I've got a card in my hand the last couple weeks and it hasn't quite been there.

“It's tentativeness.  I mean, four rounds ago, I was winning a golf tournament.  It shouldn't be confidence. I’ve just got to find my own little groove and try to get back in.”

Adam Scott said he got some "real beauties" of offers to be his caddie after parting ways with Steve Williams in September.

“There was a letter from a Japanese guy, and apparently he's related to the royal family over there, but even in his letter, he says he's extremely lazy," said Scott, who hired Mike Kerr in December.

"A guy here in Florida also sent in a picture of himself, big strong guy, looks like he works out, muscle-man kind of thing and lives with his 85-year-old mother.  He made a point of telling me that, as well in the application. Unfortunately, for them those ones were unsuccessful.”

On Williams, Scott said: “For the moment, I think Steve's done.

“The last time we spoke about him caddying again was at the back end of last year, and he said, ‘I'm going to take a year and be at home’. I honestly believe he's thoroughly enjoying that, and he's got pretty involved with all things New Zealand back there that he does, racing and coaching rugby and all that kind of stuff, playing some touch rugby himself."

Patrick Reed claims not to have any superstitions – before reeling off a list of quirks.

“I always mark my ball with the tails,” said the American world number 15. “I never put it on heads.  If I pull it out of the pocket, going on heads, I'll literally flip it over to tails.

"Six tees in the pocket, only play three golf balls, No. 3s.  Red shirt final round.  I have changed that up a little bit, every once in a while.  I've worn the same black golf shoes now for a year and a half, same ones.”