Lucy Robson thrilled her fans yesterday when she posted a video of a superb trick shot on Instagram. 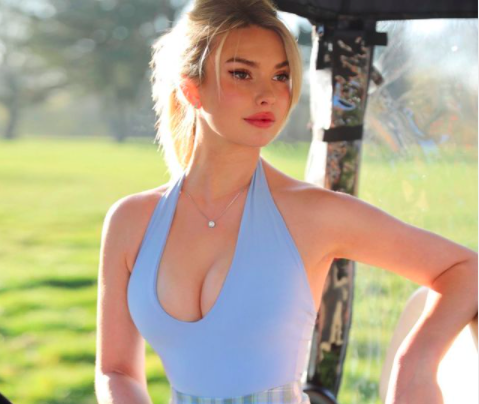 Clothing model and social media personality Lucy Robson showed off her impressive golf skills on Instagram when she posted a video holing an incredible trick shot.

Robson, appearing to be in a garden of a house, put her putter in front of the ball and used the back of the club to loop the ball over her head and into the hole, with her pet dog also in attendance.

The 26-year-old is no stranger to catching the eye on social media, as she has over 900,000 followers on TikTok and nearly one million followers on Instagram.

WATCH THE VIDEO BELOW AS ROBSON HOLES TRICK SHOT

"How many times did the dog get cranked with a golf ball for this," one fan said.

"No way you got that in the first attempt," one fan commented.

"Didn’t even realise there was a trick shot until right at the end..." another fan commented.

"Stunning figure and talented too!" another fan said.

"Nice shot! She wasn't worried! She knows she is your baby!" one fan said.

Robson is a clothing model for Fashion Nova and can often be found showing off different outfits from the popular brand. She is also an ambassador for SWAG GOLF.

The young social media influencer began playing golf at a young age when her family moved to America, and she has competed in national and international competitions.

She does not play as competitively now, but she has turned her attention to posting exercise and fitness videos on her social media platforms.

NEXT PAGE: COULD THIS BE TONY FINAU'S WEEK AS THE AMERICAN LEADS ON THE PGA TOUR AGAIN?

lucy robson
instagram
tiktok
SWAG GOLF
fashion nova
Previous
Could this be Tony Finau's week as the American leads on the PGA Tour again?
Next
Golf fans react to Wyndham Clark hitting shot near an ALLIGATOR

Golf news
The video that is making all golfers ANGRY on Instagram this week
GPS Devices
Blue Tees Golf Series 3 Max Rangefinder Review | "Quite simply superb"
Golf news
Paige Spiranac hits back at critics: "I would SMOKE you on the course"
Golf news
Paige Spiranac picks Bengals to win Super Bowl | WIN a chance to play with her
PGA Tour
CBS Sports writer believes THIS PGA Tour pro is the worst dressed in the world