Golf fans all over the world were delighted to see Tiger Woods in high spirits when he posted on his Instagram page on Friday. 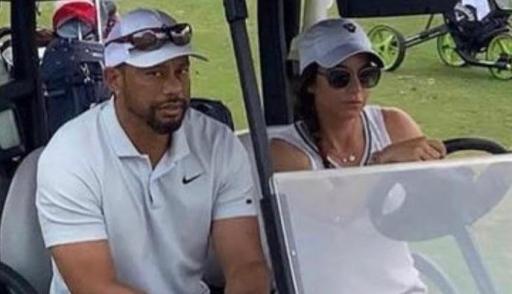 Tiger Woods thrilled golf fans across the world when he posted a picture of himself in a leg brace and holding crutches on Friday.

The legendary golfer seemed in high spirits and he has now been spotted watching golf in public with his girlfriend Erica Herman.

Woods was in a golf cart with Herman to see his son Charlie play on the Hurricane Junior Golf Tour in Florida, which is the world's largest multi-day junior golf tour.

The 15-time major champion was still required to wear a leg brace while watching his son at the PGA National Junior Open, but once again it was great to see Woods up on his feet.

Woods underwent surgery after his horror crash in California in February, when his car flipped multiple times across the road, hitting a tree and coming to rest several hundred feet away from the road.

The 45-year-old was extricated from the wreck by emergency services and underwent surgery on open leg fractures and injuries to his foot and ankle.

After the accident, LA County sheriff Alex Villanueva said that the main cause of the crash was the speed at which Woods was driving, which was nearly to double the speed limit of the road.

The 82-time PGA Tour winner informed his followers on social media on March 16th that he had returned home to rest after surgery, and it is clear to see that his recovery is going well.

In further news on April 16th, Woods announced the opening of The Hay which is a short 9-hole golf course at Pebble Beach that he designed. It will give golfers of all ability and experiences the chance to play a great 9-hole course at an iconic sporting location.