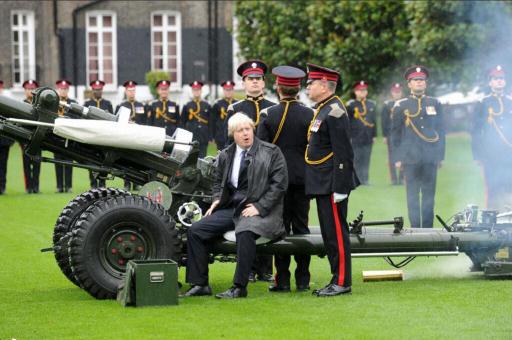 BORIS JOHNSON has criticised The Shire London and West London Golf Centre for planning to build two 18-hole golf courses in London over the next two years.

The organisation want to build one of the courses on Busy Farm in Edgware which has led to concerns animals may be left homeless.

Plans for around half of the 200-acre build need to be approved by Barnet Borough Council and the charismatic London Mayor but Johnson has made his feelings clear.

Johnson’s spokesman said: “The mayor has now responded to the council with his initial views regarding this application.

“It is his belief that some aspects of the proposals do not comply with the London Plan [the statutory spatial development strategy for the Greater London area] and require further clarification.”

The owner of The Shire London and West London Golf Centre, Tony Menai Davis, said there is a demand for a new golf course in the area as The Shire is at full capacity.

Mr Menai Davis said: “The golf industry has changed, and what is in the area at the moment is traditional members’ clubs built 100 years ago.

“People want to play on top quality courses, which we can offer here.

“The Shire is a proven success and we are at full capacity – but we can’t expand anymore, so this is ideal.

“We’ll be attracting a different clientele. Business here is fantastic and I know this is a well-wanted, well-needed course.”

However, Hendon Golf Club’s chairman, Andrew Hoffbrand, said: “We’ve fallen on severe times and golf clubs in the area are seeing their membership diminish. It’s happening, there’s nothing we can do to stop it.

“But what we don’t need in any shape or form is a new golf course. It would ruin everything. It would soak up any other potential members.

“It wouldn’t be a good thing at all.”

Aldenham Golf Club’s proprietor, Jacqueline Phillips, said: “The last thing the area needs is a golf course at a time where others are looking for members.

“It’s a concern – the recession has hit golf courses hard and people haven’t got much money to spend, so leisure is the first thing they cut. If this were to go ahead, it would give us all a smaller slice of the cake.

“One old established club told us that in order to retain members they had been forced to halve all their fees thus dramatically cutting their income,” said local resident Linda Cherry.

“Another had imposed a one off £200 levy on all members to remain solvent.

“Any employment brought to the area by this new club is very likely to lead to the closure of some existing clubs with resulting loss of jobs.”

Matthew Offord, MP for Hendon, said: “I do not see any need for another golf course in this area.”