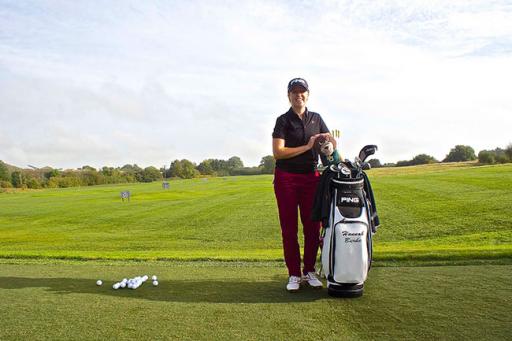 Burke visited the club just before heading to China where she is to play in two Ladies European Tour events before finishing her season with another two appearances in India and Dubai.

During her visit Burke gave a clinic to members during which she displayed the skills which helped her to finish second behind Catriona Matthew in the recent Aberdeen Asset Management Ladies Scottish Open at Archerfield Links.

“The new range is fantastic,” said the 25 year-old from Welwyn Garden City who is currently in 32nd place on the Ladies European Tour Order of Merit.

“It’s exactly the sort of facility you need if you want to improve your game and I’m sure it will be very popular with members.

“I’ve visited Essendon quite a few times over the summer and there’s a real buzz about the place,” she added.

The new range is the latest phase of an ambitious long-term improvement plan put in place when the club was purchased just over a year ago by well-known local entrepreneurs, Kieran and Liam Griffin, and their partners Elaine Ratcliffe and Clare Griffin. They have invested heavily in upgrading both its Old and New Courses and extensive renovation work has also been carried out on its attractive clubhouse built around an original 16th century barn.

“The new practice ground is the latest phase in our long term plan to turn Essendon into Hertfordshire’s most popular family club,” confirmed Elaine, who played for Great Britain and Ireland as an amateur and is also a former Rookie of the Year on the Ladies European Tour.

“We set out to create a club which has both first class facilities and a relaxed and friendly atmosphere and it seems to have struck a chord because our membership has increased by over 200 this year and green fee business is up by well over 50%.

“I’d like to take this opportunity to thank Hannah for coming here today and spending some time with our members,” Elaine added. “It has been a great morning and we’d all like to wish her all the best for the rest of the season. We will be watching how she gets on.”