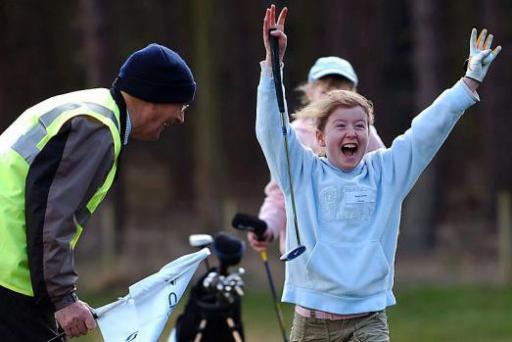 THREE businessman have offered £20,000 to golfers who can succeed in their putting and pitching challenge.

While enjoying an alcohol-induced round of golf over Christmas, business partners Paul Downs  and Edward Lennie began comparing putting skills before they had the idea.

After many more drinks they decided to stump up £10,000 to anyone who could win their Hotshots Putting Challenge which tasks players to hole five consecutive putts from 10ft, 20ft, 40ft and 50ft.

The Newcastle pair pitched the idea to Ramside Estates managing director John Adamson and he matched their offer as well as providing free use of Ramside Golf Club for the charity event.

An added addition of a pitching challenge was added with anyone who could land three balls inside a target zone from 140 yards also picking up £10,000 and the first golfer to get a hole-in-one on the Par 3 Challenge will get another £1,000.

Mr Lennie, 48, said: “We’ve played golf for years and we always doing the putting challenge. You think it’s impossible, but then again you think it’s do-able.”

Downs, 38, said: “People love a challenge. It’s a miserable time of year and people could come here and win a life-changing amount of money.”

Mr Downs and Mr Lennie run events firm Max-A-Millions and describe themselves as “fair to middling” golfers. They have staged numerous charity fundraisers including for the Percy Hedley Foundation, which has helped Mr Lennie’s 15-year-old son Sonny, who has cerebral palsy.

Around 150 golfers have already signed up and it costs £5 per challenge with no limit on the number of attempts.

Competitors are invited to turn up on the weekend, but limited spaces are available so booking is advised via max-a-millions.com.