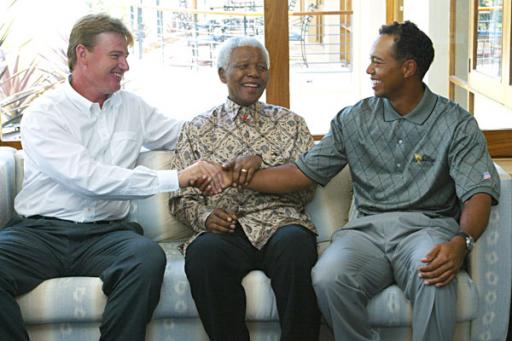 THE WORLD'S LEADING sportsmen have been paying tribute to Nelson Mandela following the death of the former President of South Africa.

World No.1 Tiger Woods and South African four-time major winner Ernie Els are among those to pay their respects from the golf world.

Els, one of South Africa's leading sportsmen, said: "It is a very sad day, a very sad day for South Africa and the world. We have lost one of the iconic leaders of our time. You cannot say anything bad about the man.

"He fought for what he believed in, went to prison for so many years and came out to lead our country up until now. He was the father of our country and our continent. He was 95 and led a full life but a lot of that wasn't spent on what he was so good at because he was away for so many years.

"I met him for the first time in 1994 with Mr [Johann] Rupert when we had a dinner together and then after that we stayed in touch. I used to play that tournament at Houghton and his home was very close to Houghton Golf Club. He came over one time and we exchanged gifts with each other. I have still got the picture from that day in 1996 in my office in the US. And then every time I won a tournament he used to call me.

"He was our president and the man who changed our lives. It could have been so different in South Africa but he kept his head and kept everyone going forward. I was in the Air Force when the ANC (African National Congress) was banned. I remember those days in the 1980s when the government was against the ANC. You know, they were our enemies.

"And then President Mandela comes in and takes over the country and leads it in a democratic way. He was an unbelievable guy and the guys who lived in that generation will really miss him."

Woods, the first player of black heritage to win a major at the Masters in 1997, said: "It's sad for everyone who got a chance to not only meet him, but I've been influenced by him.

"I got a chance to meet him with my father back in '98. He invited us to his home, and it was one of the inspiring times I've ever had in my life."

The 18-time major winner added via his Twitter account: "Pop & I felt your aura when we met, I feel it today & I will feel it forever. You have done so much for humanity...

"You will always be in my heart Mr. Mandela."