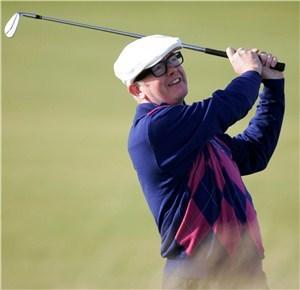 Radio DJ Chris Evans has allegedly been ‘barred for life’ from the Alfred Dunhill Links Championship Pro-Am tournament after giving himself too generous a handicap to help him win last year’s renewal.

Evans partnered Englishman Nick Dougherty to win with a staggering 40-under total last year with rounds of 66, 57, 64 and 61 at Kingsbarns, Carnoustie and St Andrews.

But with just three months left until the One presenter was due to defend his title, it has emerged he has been banned.

Both Evans and event organisers refused to fully explain the reasons behind the decision, but it emerged last night it may be have been the result of the 46-year-old’s 10-handicap.

“Sadly, I will not be defending my title this year. Why? It transpires I’ve been banned for life,” said Evans.

“I could go into why but frankly it’s all a bit of a bore. Suffice to say, if we were kids in the playground, the boy who owns the ball just took it home in a huff because his team didn’t win.”

This time last year, writing in his column in the Mail On Sunday’s Live magazine, the broadcaster revealed there had been ‘rumblings of dissent’. He wrote: “Along with congratulations, there were rumblings of dissent. The gloaming was dark with talk of my handicap being too high for my ability.”

The ban comes as a shock to Evans, who had already booked time off from his radio show to defend his title this October. Yet in spite of that, Evans has joked he may set up rival competition for his golfing and celebrity A-listers.

“Any sour grapes? Not really. But it crossed my mind to set up an alternative tournament on the exact same dates. I think I’ll call it the Dung Hill Cup.”