You would expect prostitutes, drugs and killing in the new Grand Theft Auto, but golf?! 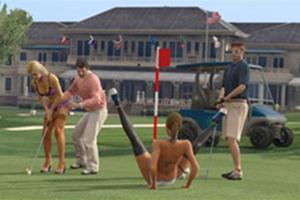 GTA V features golf in the latest addition of the violent computer game.

The fifth instalment of Rockstar Games' Grand Theft Auto franchise has already sold over £500 million worth of copies in the first few days of sales and is now looking like it's Tiger Woods PGA Tour's main competitor.

Away from stealing cars, evading police, being involved in drug deals, and enforcing street justice a gamer can play the local links in downtown Los Angeles.

Amusingly, it's against the rules to hit an opponent with a club - clearly the developers have adhered to the strict etiquette and rules of the R&A and USGA.

Players can even partake in competition throughout the game with a chance to post scores and play on a multiplayer platform.

Click this link to watch how you can play golf in the new GTA V.