Do warm golf balls really travel further than cold ones? We got up early to find out... 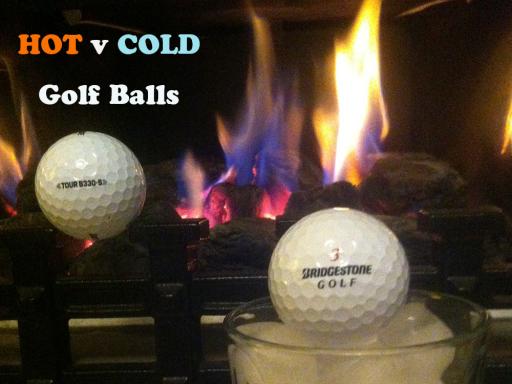 While I know this was simply an experiment, I still didn’t want to breach the rules of golf. A check of the Decisions on the Rules of Golf revealed to me that warming balls ahead of the round is perfectly legal. Decision 14-3/13.5 essentially states that while golf balls warmed during a round are a breach of Rule 14-3, balls warmed prior to a round are OK.

Given I’ve played my local track for the best part of 14 years now, I’d like to think I know what clubs to hit into the opening four greens. On a good day, or should I say one at double-digit temperature, the first is always a driver, 8-iron, chip/putt.

After a few practice shots on the range and with the course to myself, I struck my first two drives out the middle of the face and down the middle. Using a GPS device to track my yardage, the hot ball travelled 241 yards down the right half of the fairway and the cold ball went 233 yards to the right intermediate. A whopping 8-yard gain.

Perhaps it was just a fluke, so I then placed both balls down next to each other where my best drive landed. With 8-iron into the green, the hot ball landed short of the pin some 30-feet away, while the cold ball pulled up way short of the dancefloor. I paced off a distance of around 12-feet between the two approach shots.

Again, perhaps a fluke, so I headed to the par-3 second, holding the hotter ball in my pocket. With 6-iron in hand from 174 yards, the warm ball landed on the front edge some 36-feet away - not great but I was putting - while the cold ball finished approximately ten-feet short of the hot ball but on the fairway. It was obviously getting a little warmer.

Onto the par-4 third, the warmer ball travelled 262 yards splitting the middle and the cold ball reached 255 yards down the right half. Again like the first, the cold ball was still seven yards short.

With 9-iron into the green, the warmer ball flew past the flag and stopped some 20-feet away, while the cold ball finished 10-feet short of the pin. The cold ball was the better result on this occasion but again, hadn’t travelled nearly as far.

Onto the par-3 4th measuring 128 yards and playing a 9-iron, the warm ball stuck 18-feet short of the flag with the cold ball again short at 25-feet.

Although I’d only played four holes, it had become noticeable that when the golf ball is colder, it loses a few miles per hour in ball speed – also contributing to distance loss due to speed.

By the fifth hole, both balls were travelling a similar distance, give or a take a few yards, and so I jumped back in the car to write up my findings.

Later that afternoon, I returned to the course and the temperature was now at 11°C (51.8°F). I now wanted to see if temperature change in the air made the same difference to distance as changes in golf ball temperature.

To ensure a fair test, I played the exact same shots from the morning but with just the one Tour B330-S ball that had been resting in my bag for the best part of five hours.

On the first hole, I hit the Bridgestone Tour B330-S down the left half of the fairway to 244 yards – a three-yard gain on the hot ball from the morning round. Using 8-iron once more to attack the pin - playing from the exact same spot as earlier - the ball landed 17-feet left but pin high. This was an improvement on the 30-feet short of the flag from earlier in the day.

On the par-3 second, the same 6-iron found the bunker right. It was a poor shot to be fair but it was pleasingly pin high - the goal of this test.

My drive down the third travelled six yards shorter than earlier at 256 yards... I guess I must have really ripped it! The approach shot again finished behind the pin exactly the same distance away as before.

At the par-3 fourth, I stuffed my 9-iron to 4-feet for an improvement on the 18-feet short.