With whom would you make up the ideal fourball 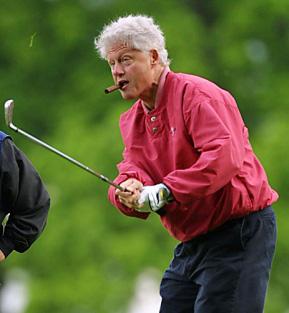 A poll by readers of Golf Magazine, one of the top publications in the US, has identified ex-President Bill Clinton, basketball legend Michael Jordan, actor Bill Murray and multi-major winner Jack Nicklaus as the personalities they’d most like to share a ‘Fabulous Fourball’.

The magazine identified 64 of the biggest names who love golf, including major winners, sports stars and Oscar nominees and asked the readers to pick from that list – more than 300,000 responded.

It probably says a lot about the celebrity culture that the competition attracted so many entries. We wonder if, given a clear field and no prize incentive, whom Golfmagic members would pick.

We suspect most would want to make up a fourball of top Tour players but there might be a sport legend in there, a golfer-playing beauty and a film or TV celebrity.

Asked about being selected, Nicklaus said: “I’m honoured to be a part of that diverse group. The only one I have played golf with is Bill Clinton in 1993. We played at the Country Club of the Rockies, a course I designed near Vail, and it took us over six hours.

“The next day we played at Vail Golf Club and I remember President Clinton had the potential to be a very good player - a nice golf swing and hit a lot of nice shots. We enjoyed great conversation about a number of topics.

“If we played with Murray, a pretty decent golfer, we would all be laughing so hard that President Clinton would have plenty of time to take as many mulligans as he wants; Jordan would be working hard to make sure he beat me.”

So tell us, which well-known personalities would you like to play with?