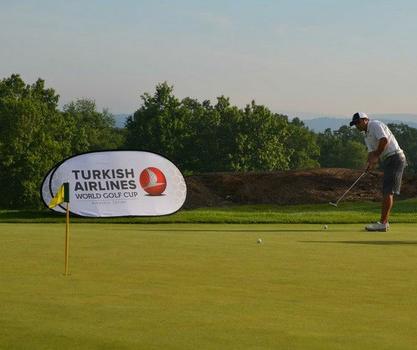 DAMIEN PATERSON and Paul Martin have booked their places in the 2014 Turkish Airlines World Golf Cup Grand Final this November after finishing first and second in the individual strokeplay qualifying tournament at St George's Hill, Surrey on Friday.

The fifteenth of 50 qualifiers for the global event, which enjoyed great acclaim in its inaugural edition last year, featured 78 players, all personally-invited guests of Turkish Airlines.

“We would like to congratulate everyone who took part in the Turkish Airlines World Golf Cup qualifier in London,” said Osman Battal, London Gatwick Director for Turkish Airlines.

“It was a brilliant day and well done to our winners, Damien and Paul - we look forward to seeing you in Antalya in November.”

It was also a memorable day for Jimmy Copperwheat who won two business class flights and a seven-night stay at the five-star Maxx Royal Hotel in Antalya after his scorecard was chosen in the free prize draw, with every player who took part in the qualifier having been entered.

The two overall winners of the Grand Final will play in the 2014 Turkish Airlines Open pro-am, while all finalists are to enjoy a seven-night stay in an all-inclusive hotel, two rounds of golf and VIP passes to the Turkish Airlines Open, the $7,000,000  European Tour event, from Thursday to Sunday.

Turkish Airlines, which was recently voted Europe’s best airline for the third consecutive year, launched the World Golf Cup in 2013. It featured 12 qualifying events and was won by China’s Han Liang. His prize for victory was partnering world number one and 14-time major champion Tiger Woods in the Turkish Airlines Open pro-am.