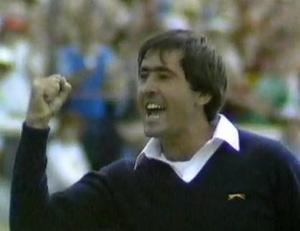 The funeral of Seve Ballesteros will take place today in a private ceremony in his home village of Pedrena, Spain.

The golf legend passed away on Saturday after losing his battle with cancer at the age of 54, and he will be cremated at an undisclosed location in the area with his ashes scattered on his home estate thereafter.

His family are asking fans to respect their wish of it being a small affair of just family and close friends, with Nick Faldo, Jose Maria Olazabal, Colin Montgomerie, Sam Torrance and Lee Westwood expected to attend.

In a statement released by the Ballesteros family, they said: “Seve will be cremated at a ceremony that will be as intimate as possible and at a place that nobody will know.

“That was his express wish. His ashes will remain at his estate, at his home in Pedrena.”

Seve’s brother Baldomero added: “The funeral rites will be as simple as those for any neighbour from the village. He was born here and here he will remain.”

Several young boys and girls will wear a replica of the navy blue outfit that Ballesteros wore for his first Open Championship win in 1979. Each will hold a 3-iron, the first club he used as a child, while Miguel Angel Revilla, head of the local Cantabria government, said the region will observe three days of official mourning.

And normally at the Players Championship, the national flag of the previous year’s winner is flown at Sawgrass. But 2010 victor Tim Clark has insisted the Spanish flag replaces his in honour of the five-time major champion.

The passing of Ballesteros, one of the most popular sportsmen of all time, has been marked across the world of sport, with silences being held at the European Tour’s Open de Espana and at the Wells Fargo Championship in Charlotte over the weekend.

Away from golf, there was a tribute before the Madrid Open tennis semi-final between compatriot Rafael Nadal and Roger Federer, while the Barcelona and Espanyol football teams paid their respects prior to their La Liga match on Sunday.

What was your favourite Seve moment? Celebrate his life and career here.

Golf news
Could you pull off this AMAZING recovery shot through the trees?
Features
A trip down memory lane: 5 of the most ICONIC player/caddie partnerships ever
Golf news
R&A to celebrate the life of Seve Ballesteros with new exhibition and film
Ryder Cup
From Brookline to the Miracle at Medinah: The top FIVE Ryder Cups of all time
Ryder Cup
Ryder Cup 2021: Ian Poulter says Team Europe have MAGIC SAUCE to deliver victory