Six of the Best... Ian Poulter

Love him or hate him, you can't ignore him 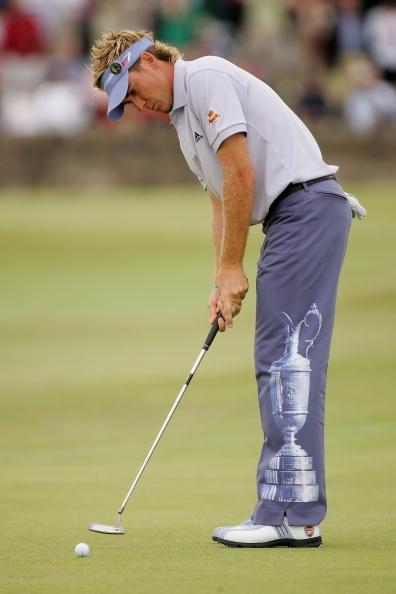 Famed for his, shall we say, interesting dress sense, Poults really broke the mould when he played in the 2005 Open Championship with the famous Claret Jug plastered down the side of his leg.

In the commentary booth, three-time Open winner Seve Ballesteros quipped: ‘That’s the closes he will ever get to it.’

Poulter finished 11th that year and so far the Spaniard is to have his words rammed down his throat – though the flamboyant Englishman did come very close in 2008, finishing second to Padraig Harrington.

We’re not entirely sure what inspired this ridiculous mane, other than national pride, at the 2003 Irish Open in Dublin. Whatever the reason, it looks superb.

Sorry, it we can’t lie to you dear readers. It looks awful. Simply awful. Thank goodness he saw sense and got rid relatively quickly.

Like a lot of people, Poulter’s number one fan is his own mother, Theresa.

“I was at home doing the ironing and watching golf on television and [Ian’s older brother] Danny phoned up and asked how he was doing,” she said.

“I said, ‘He’s doing really well. He’s on the leaderboard. But it’s doing my head in that they’re skipping his name. They’ve not mentioned him once.’

“Danny replied, ‘Give them a ring.’

“To this day, I don’t know where I got their number from or how I got through to the sports desk at Sky.

“I said: ‘It’s Ian Poulter’s mum here. My son’s doing really well in the tournament you’re showing and you keep missing his name out. Why don’t you mention his name?’

“That reached the commentators, who said, ‘We’ve just been told off by Ian Poulter’s mum for not mentioning him.’ That was the only time I have ever done it.”

Shortly after helping Europe to victory at Celtic Manor, Poulter was loaned the Ryder Cup trophy for a charity event. After waking up late, and a quick scramble through the cupboards, the 34-year-old discovered there were no clean bowls. So Poulter and his kids chowed down on some Cheerios from one of golfs most famous jugs.

It was a replica, of course it was, but people didn’t realise this and went [Honey Nut] loops about it.

“How dare he?!” squealed the old fashioned.

“He’s just having fun,” was the general response from people with a sense of humour.

Poulter has often been accused of being all style and no substance. These accusations were banded about again when Cobra released an all-white version of his ZL driver just for the Englishman to use.

Since teeing off with the limited edition club, he has finished tied-13 th at the WGC-HSBC Champions, fifth in Singapore and first in Hong Kong.

And, of course, you can win the driver right here on Golfmagic.

“The trouble is I don’t rate anyone else. Don’t get me wrong, I really respect every professional golfer, but I know I haven’t played to my full potential. When that happens, it will be just me and Tiger.”

This quote, from an interview with Golf World’s Peter Masters, caused Poulter a lot of grief when it was splashed across every newspaper’s back page.

“To be honest,” began the defence. “I’ve had a lot of comments on that and people that have read the whole article have said that they don’t know what the problem is.

“It was a day of banter with the boys, to be perfectly honest with you. I got a lot of stick from the lads but that’s been about it. It’s all in the past and now it’s fish paper.

“I speak my mind - perhaps too much occasionally - but I’m being brutally honest and that’s how I’ll stay.”

And how did the magazine illustrate the article? With Poulter in the buff. Obviously.

Don’t change Ian, we love you the way you are.