Pace of play causes yet more problems in America 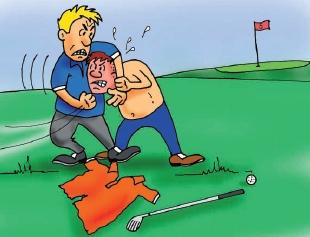 The problem of slow play on the golf course has taken a turn for the sinister in America after a Texas golfer was stabbed in the leg with the shaft of a broken golf club following a verbal altercation with a member of the group ahead.

The 48-year-old victim, Clay Carpenter, who may lose his right leg following the incident in Fort Worth on January 27, suffered a punctured femoral artery resulting in serious blood loss, according to the Fort Worth Star-Telegram.

Carpenter and his two playing partners had asked to play through the fourball ahead of them due to their pace of play, before the victim alleged he was confronted by one of the men. A verbal attack turned physical, resulting in the pair scuffling on the fairway.

Carpenter confirmed another man in the fourball then used a broken golf club as a weapon to stab him twice in the leg with the shaft.

“People get in arguments every day on every golf course in America,” Carpenter told his local newspaper. “But 99.9% of the time, no one takes it this far.”