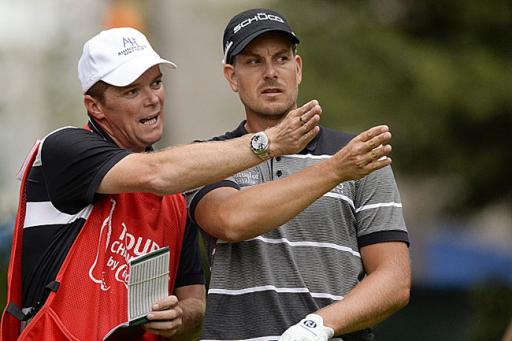 MOST people know the anecdote about Steve Williams being the richest athlete in New Zealand when on Tiger Woods’ bag.

But what about man of the moment Henrik Stenson’s caddie? The Swede won over £6 million for triumphing at this year’s FedEx Cup and £5 million for winning the Race to Dubai and his career earning stand at around £17 million.

It’s safe to say he is something of a cash cow for caddie Gareth Lord and he has earned enough to purchase a Ferrari if reports are to be believed.  We’re not sure which car he went for but we’ll be sure to let you know as soon as we hear.

Lord, or “Lordy", played amateur golf in the Midlands in the 1990s before becoming a professional coach in Germany.

He decided to become a caddy and won Caddie of the Year in 2008 when on the bag of Robert Karlsson who won the European Tour’s Order of Merit that year.

His caddying credentials are said to entail calmness under pressure, an ability to keep his player relaxed and extreme organisation. He was also the first person to identify that the strange sounds he heard when Karlsson and Tiger Woods played together were coming from the American’s knee.

On Lord, Stenson said: “Gareth or "Lordy" as he is more known as is a great caddie and very hard working. He is fun to be around and we are probably just as crazy but in different ways..............thankfully!

“It is very important to get along when we spend that much time together on the course. I guess it helped us both that we had some history of knowing each other from the time when Gareth worked for my friend Robert Karlsson and we won the 2008 World Cup together and also played some better-balls in the 2008 Ryder Cup.”