Why Jimmy White's not so hot 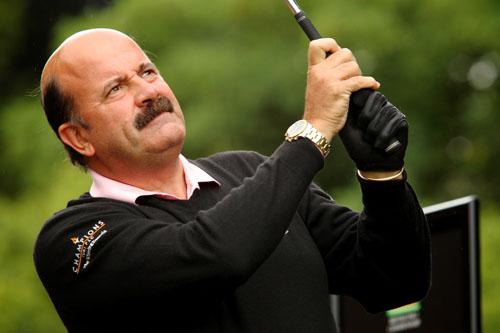 Among the celebrities taking part in the Farmfoods British Par-3 Championship at Nailcote Hall, near Coventry from August 9 – 12, is former snooker star and now TV commentator Willie Thorne.

Like most ex-sportsmen he's nuts about golf and when we caught up with him he was polishing his game ahead of a series of charity celebrity-ams hosted by Manchester United manager Alex Ferguson (The Belfry) and Ian Woosnam (Archerfield Links).

How long have you been playing golf?

It's more than 20 years years now. I never really played until the guys on the circuit like Dennis Taylor and Cliff Thorburn introduced me to it. Then I got the bug and haven't looked back since! Seems like only yesterday but I haven't played a snooker tournament for 14 years.

What's your handicap and where do you play?

I've got down to 12 handicap now and play most of my golf at Kilworth Springs and the Marriott Forest of Arden.

What are your favoured clubs in your bag?

I'm very fond of my 52- and 56-degree TaylorMade wedges and my Rossa putter. I rely on it heavily, especially when trying to rescue poor approach shots!

Tell us about you favourite courses.

Loch Lomond and Archerfield are magnificent - their history and tradition make them what they are; they're simply fabulous. For its condition, I'd say Forest Pines is one of the best hotel golf courses in the UK.

What about a memorable recent round?

I played a cracking round last week at Kenny Dalglish's golf day at Royal Lytham & St Annes. I scored 31 points. Doesn't sound that great but in abysmal weather when it was windy and difficult conditions, I thought was a good effort!

Who's the best golfer on the snooker circuit?

It has to be John Parrott. He is a very good two-handicapper and probably spends too much time on the course! Stephen Hendry plays to a four handicap and is always a tough to beat.

So who's the biggest bandit?

Without a doubt - Dennis Taylor.  He's very consistent and regularly scores between 34 and 40 points whenever I play with him, which is a lot. But I usually play well with Dennis, too. We've been playing together for 12 years now and just like in the commentary box, we've built a camaraderie.

Who's the worst golfer?

Last time I played with Jimmy White, he was pretty terrible! But that was two years ago so he may have improved by now! But I doubt it!

What kind of golfer do you prefer not to be paired with?

Anyone that doesn't have a good knowledge of golf etiquette!

Who's the biggest poseur when it comes to dressing up on the golf course?

What about some of the unusual places you've played around the world?

I remember playing a desert course in Dubai where we carried around mats to play on the sand! There was also a trip to New South Wales Golf Club in Australia where the wind was so changeable on one par-3 it was a 7 iron one day and 3-wood the next! Bizarre.

How much in side bets do you play for with other snooker players?

A few quid, just enough to make it interesting!

Your tip for The Open Championship at Sandwich?

As I work for the golf management agency Champions UK and we look after European Tour professionals including Graeme Storm who qualified at Sunningdale this year,  I'd love to see him do well. I can also see Rory McIlroy cementing his status as one of the world's best and to build on that fantastic US Open win.