Burhill GC welcomes back an honorary guest for BBC documentary 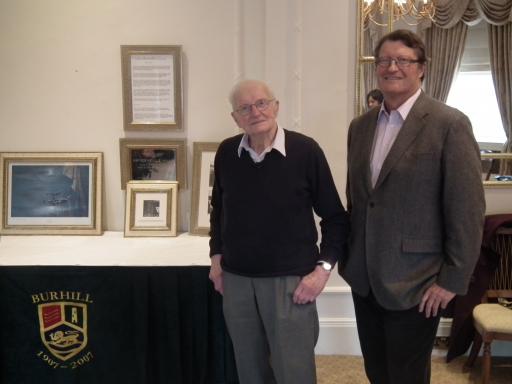 BURHILL Golf Club, former headquarters for Sir Barnes Wallis - who developed the bouncing bomb, welcomed back a member of his team last Tuesday for a BBC News Feature.

In 1940, the Ministry of Aircraft Production requisitioned Burhill’s clubhouse for a 300 strong team engineering the design of several aircraft and weapons during World War II.

Martin Aitchison, 94, an artist by trade, worked in the Georgian mansion in the early 1940’s and returned to the Barnes Wallis Suite for a documentary on the 70th anniversary of Operation Chastice (May 17, 1943), the Dambusters raid.

Talking to the BBC about his experience, Martin said: “I never felt under pressure from work, but everything we worked on was top secret. Occasionally the tea lady would take an interest in one of my drawings so we had to make up elaborate stories about what they were for.”

Martin's deafness precluded him from active duty and instead joined the staff at Burhill Golf Club where he intended to put his flair for drawing and art into becoming an engineer.

David Cook, Burhill Golf Club general manager, said: “It was an honour to meet Martin and hear about his experience here during the war.

“It is too easy to forget what work took place here as recently as 70 years ago, and it’s humbling to be in the presence of someone who was part of such an important and well-known operation.”