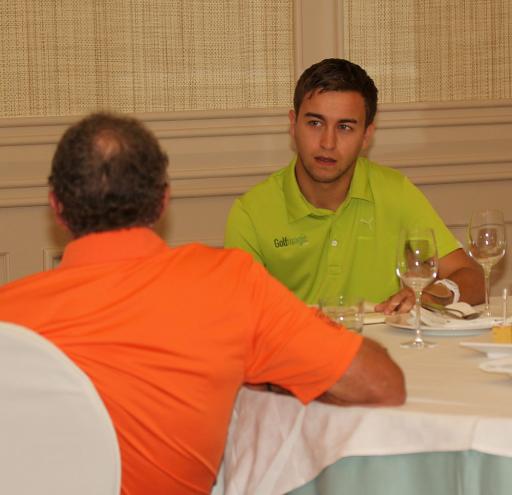 You’ve obviously worked with some of the game’s finest throughout your career, accumulating 19 majors and counting in the men’s and women’s game, but which of the players in your stable would you say has been the most naturally gifted?

I would have to say the most naturally talented player I worked with was Ernie Els. I worked with him for many years, and he was probably the most talented athlete I’ve coached. From a golf swing standpoint, as you say, I’ve had the good fortune of working with some of the finest players, both men and women, in the game. When Nick Faldo was playing his best, I mean there was probably nobody who swung it better than him. Nick Price the same, and also Greg Norman. But from a pure natural golf swing, I would say Ernie. I bet if you asked the average golfer which pro golfer’s swing they’d like to own they’d say Ernie Els, simply because it looks so elegant yet powerful at the same time.

So would you say Ernie possesses the greatest swing you’ve seen in the game?

It’s always a tough one that question because swings are like fingerprints. If it’s pleasing to the eye then you’d probably look at Rory McIlroy or Adam Scott right now. Man, they are two great golf swings and they produce the goods. On the other hand you could say one of the great golf swings throughout the eras, given the longevity, is Fred Couples. He’s someone who has played tremendous golf and he’s still going strong in his 50s. His swing has lasted three decades so you could say that’s also a great golf swing. So it’s really what someone determines a great golf swing. If you’re looking at repetition then I’d say someone like Jim Furyk as crazy as that sounds. Jim has a swing that produces consistent shots, shot after shot.

Do you believe Tiger Woods needs a golf coach in his life right now, and if so, where do you think he should go?

Tiger has always been a player that has had a coach so yeah, I’m sure he needs someone who he can confide in and bounce things off, but I don’t think he needs someone to come in and say ‘okay well listen we need to reinvent the wheel here’. First of all he’s 39 years of age, he’s got some serious health issues and physical issues, and he needs to find something he can do on a regular basis and make sure it has some sort of scientific authenticity attached to it. I don’t think he needs someone coming in there and saying ‘well listen, here’s my new method for you and this is what I think you should try’ because I think Tiger is too great a player. If he’s looking for somebody like that then he’s not giving himself enough credit for knowing, I mean, he’s been through sort of three major swing changes in his life so you would think he’d figure out maybe I’ll take the best of this, the best of this and the best of that, and try and mix and match to see if he can find something that works.

From what you can see in Tiger’s swing right now, what would you change if given the reigns?

Well he’s not 25 anymore. You can swing a certain way and Tiger’s swing is very dynamic and very powerful, but he’s putting a lot of strain on his body. For me, he doesn’t have enough, what I would call, rotational movement in his back swing. It’s very restricted. Some people call it the ‘X Factor’ where you have very little movement with your lower body and a huge upper body wind up. He’s got a lot of flexibility in his upper body but the problem is when he does this, to me, Tiger’s issue more than anything else is that he lacks when he’s not swinging well, he lacks synchronisation between his upper, his lower and not only that but his torso in general and his arms. He gets so explosive that the arms, the hands and the club sort of just trail to such an extent and they can’t catch up. We always hear about it, why doesn’t he swing smoothly, well it’s hard because he’s a very sort of ballistic type of guy, but when he swings it soft and smoother, things sync up a little more and he hits it online. But that’s not Tiger, he doesn’t want to see Rory hitting it 30 yards by him. That’s not his game. Tiger’s not going to be the longest out there anymore. He used to be, but other players can’t hit it further. Time has changed.

I think back to Seve Ballesteros, who represented La Manga Club many years ago, and I worked with him for a year in the early 90s. He was going through some serious back problems at that stage too, and I sort of got into his head and told him he needed to change his game plan. I told him ‘You’re not going to be the old Seve, you need to find a way to hit the ball in the fairway and then use your strength from 100 yards and in to play great’. He did that for a year and then some family member talked him out of it and basically said ‘you can’t swing like that, Seve’. From that point on, his game never really got any better.

If you could have worked with one player in the game that you never got the chance to, who would it have been?

[Pauses] That’s an interesting one. Look, I mean I did have quite a long session with Tiger when he was 17 but it didn’t quite work out because he was in California and I was in Florida, and he then decided to go to Butch Harmon at the time because he was either closer or whatever it may have been. You always look at it and think about the opportunity of working with just an unbelievable talent but I don’t really have any regrets. You would love to work with all the top players but unfortunately that’s not possible. Yeah I mean I might look at a special talent and think wouldn’t that be a nice challenge to help nurture them. That’s really what I do right now with players, I try to nurture them. Golf is an individual sport so players have still got to get to the top through their own individual endeavours and efforts.

How are you enjoying working with your current crop of players, such as recent US Women’s Open champion Michelle Wie?

Yeah I sort of work a lot more with the girls now. I tried to cut back over the last few years because I’ve done a lot of travelling for so many years. I still work with Rafa Cabrera-Bello and Alex Levy, but I work with a lot of the girls like Suzann Pettersen, Lydia Ko and Jessica Korda. I really enjoy it, the women’s game is coming on leaps and bounds. There's a little less pressure and they’re very thankful. It's a bit more of a full time job out there with the guys. You look at the likes of swing coach Pete Cowen who is out there on Tour nearly every week. There’s no way I could do that. I don’t believe that’s actually the best way of doing it but obviously he’s had a lot of success. He’s a great coach and knows what to say and when to say it, but I’m a little old fashioned and think the players need to get out and figure it out themselves.

So did Michelle Wie consult you about her wacky new putting stance?

[Laughs] Everybody asks me that! No, that’s something I had nothing to do with. That was a home grown approach that she always felt that, and there’s a certain amount of truth to it, players closer to the ground putt more consistently. Michelle is 6 foot 1 and she felt she didn’t have good control over her stroke. So she thought ‘what if I somehow get closer to the ground and alleviate that problem of being too tall’. It's like a table top effect or whatever they call it. She's maybe not quite as over the ball as she once was, she’s probably about 5-degrees upright now. I call her the ‘drawbridge’ as she’s slowly starting to come up and in about 20 years she might be back up to normal! It’s unique though but that’s putting. Whatever gets the damn ball in the hole is all that matters. If you look back at Jack Nicklaus, he looked like a crab setting up to it, with a very hunched posture but not many people spoke about that because he was so successful. It's so far, so good for Michelle though.

David, how proud are you to open your new Leadbetter Academy here at La Manga Club?

I’m really excited. Funnily enough, as much as I’ve heard about La Manga through the years, this is my first time ever to La Manga. So that’s a bit strange. Obviously it’s got great tradition with Seve Ballesteros having used to play here with his brothers each year, and you’ve had the Tour School here. It’s just one of those cache names that has been around in the golf world for a long time. We’re really excited to be involved as it’s part of a sports complex here, bringing teams and coaches here. It’s like a Disneyland for sports here. Not only does your recreational player want to play golf or tennis but you’ve got the likes of Bayern Munich and Barcelona coming here to train here. Being part of the sports complex really lends itself to what we do. We not only do a lot of training with juniors and amateur teams, so it’s a great fit from our standpoint.

How has golf instruction evolved from the time you started out as a coach up to present day?

I would say I still have my core beliefs but the technological aspects to it has changed, which is a nice add-on to what we do. Obviously we’ve used video for years but now you’ve got things like Trackman and PuttLab and so on. It’s the way the game is now analysed and looked at, but only if it’s used correctly. The problem, however, is that it’s only as good as the user. I think some people abuse this technology to the point that someone goes in one end of the building and goes through all the technology and comes out the other end a better golfer. Well that’s not going to happen. It’s really how it’s used. From my standpoint, it helps to quantify issues and subsequent improvement.

And in one word, Europe or United States for the Ryder Cup?