Life on Tour and views on golf equipment industry 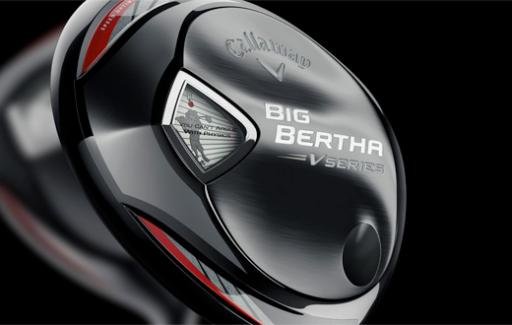 The fastest Big Bertha yet screams the new Callaway advert, but just how much extra distance do you think the average golfers can expect to receive with the V Series driver in relation to the previous Big Bertha drivers?

There is anecdotal stuff there and then there's robot type things. The anecdotal stuff is more impressive because people get advantages of the weight whereas the robot doesn't. The robot is too strong to take advantage of weight benefits. We've seen people improve their launch conditions a bit, improve their average ball speeds, and with that, we're seeing up to seven yards on average but we've seen up to 15 yards in some cases. Not everyone will get that but there's a capability there to do that.

How do you turn an idea into a golf club and what processes are involved from original idea to manufacture?

There's a lot that goes into it. The thing that we like to do fastest is make prototypes but we have to do that in a way that makes sense, only if a question we can't answer in another way. We can simulate a lot of performance for that on the computer and that's one of the earliest parts of the process. When we think we've got something that's worth building, we build it straight away. we then put it through lots of different testing. It's a build and refine type of process. Then industrial design and other things like that then get loaded in. The senior management team at Callaway is really engaged in that process, right up to the CEO. These guys are all exposed to the test data and the thought process and they help make sure that what we're doing is consistent as a brand and that it's relevant to the market when it launches, or relevant to help us lead the market when it launches.

How closely does Callaway work with its Tour players when designing new product?

Our Tour players are pretty highly involved but it varies by product type. They have most involvement over clubs for elite players or better players. Their insights are good as they can put into words things that average golfers can't, so we like that. We like the idea of making clubs that they will use on Tour better with their input. They can see their own thoughts and fingerprints on it and makes it easier for them to transition into new product.

Which Callaway Tour players are the most knowledgeable when it comes to helping out with product?

I think Phil [Mickelson] would say he's the most knowledgeable, but that's his opinion. He's knowledgeable about lots of stuff!

Someone like Jim Furyk provides us with really good feedback. Then you've got other guys like FedEx Cup leader Chris Kirk, who won the Deutsche Bank Championship two weeks ago. We played hole after hole with Chris recently and we gave him two forged muscleback irons that were identical but had different groove patterns. He hit shots out the rough to illustrate to us his thought process about going to a front or back pin. It was really useful information and that helped guide us to the exact geometry used in the new Apex MB iron. That kind of stuff is pretty cool.

Are there any Tour pros who don't care too much?

Some will come and hit a new product and say 'yeah I like it but I like mine better'. Often we're asking our staff players to not consider new product in terms of what's better for them, but to sort of put their test pilot hat on and tell us what's good for them plus for other good golfers.

Some guys aren't so into doing that. Having worked with Ernie [Els] from time to time, who isn't part of our staff any more, he's a really easy fit and almost fits stock product. But as a result he doesn't really pay a massive amount of attention to it.

Talking of the Tour player, how excited are you by the new Apex MB and Utility iron that was unveiled last month?

We're really excited about these clubs. It's been good in the sense we can listen to our Tour players, interpret what they're saying and blend their specific needs with our scientific ideas. We believe with the Apex MB, we've produced a club that has the look of a real authentic forged golf club, hence we are proud put the historic Apex name behind it.

The new Utility club is a good build on things we've learnt from the Tour player as well. For example, the way that they hit off a tee with that club as well as from other lies, and the way that they see certain shots. Some guys want to take one side out of play so the idea that it has no left in it is ideal. Some players also like a taller face to look at. We have blended their thoughts with construction and a Forged Cup Face.

These clubs will be going in the bags bit by bit. It will be more of a transitional period for them after the FedEx and Ryder Cup.

What's the best bit about your job?

Getting to work with the Tour players is very fulfiling as too getting to see our equipment in action on Tour or events like the Ryder Cup. In the heat of the moment on a Sunday and helping someone win feels pretty cool. I'm also privileged that I get to work with a really capable group of people at Callaway R&D. As much as its fun to see the Tour pros play well, it's great to see when you talk to people who go out and work with real golfers in demo days and shops that they can make genuine improvements to average golfers. Things like that are great to hear about.

Where do you see Callaway drivers in five years time?

[Pauses] I think we've got a platform where we're trying to encourage more people to buy drivers by getting fitted. There are definite advantages to doing that. One of the advantages is we're not as constrained by the rules when we allow the club to get fitted to the golfer's specific needs. So we think that's where we'd like to be. We want to be known for being the best performance when you get fitted, and that you should buy these clubs using your pro and other means for buying them to get them customised to yourself.

Can the ball keep going further?

Yes it can. We've seen hints of how we can do that so we're chasing that pretty hard right now.

And finally, what do you make of the golf equipment industry right now?

It's a place that's had some challenges in the public eye in the last few months. Some of it is maybe overstated somewhat. The woods category appears to be the one that has had the most challenge. Other categories are basically flat. If you look at the data for the past few years it's been flat, and in the US, there's been an up year and down year.

The industry has challenges that we've over supplied it a little bit and that needs to be addressed, and it is being addressed right now. We need to learn how if we're going to launch new products, launch them in a way which is more well known that there will be another one coming along not too far down the road, so that you shouldn't over inventory on them and that we should work out ways that there isn't a long tail of old stuff lying around. So I feel there's maybe some transition required in the industry to adjust to the pace we're working at.