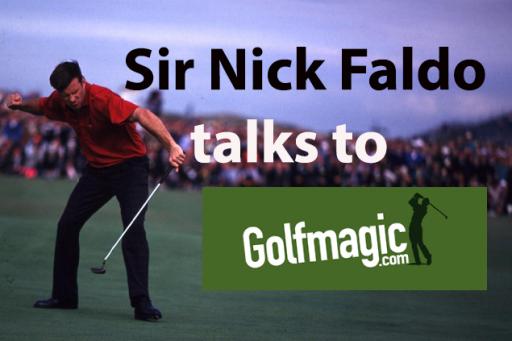 The six-time major champion spoke openly about Rory McIlroy's performance at the Open, Tiger Woods' chances of making the US Ryder Cup side, the legendary Seve Ballesteros and whether or not he chose his own Pringle jumpers back in the day...

Sir Nick, many thanks for taking the time to speak to Golfmagic. Could you begin by telling us how pleased you are with the new limited edition Faldo Series watches?

I am very grateful to Jaermann & Stübi for their contribution to the Faldo Series. It's a very cool idea. Seve [Ballesteros] did it first and then they came to me. They wanted me to take a set of clubs that have some meaning, and so for me, it was the last set that I won with at the 1997 LA Open. I had these clubs just sitting around, so it was perfect. They have then crafted them all into this watch.

How will the watch sales contribute to the Faldo Series?

Jaermann & Stübi have made 72 of these watches and we will get $72,000 for the Faldo Series. This will be greatly used. We're going to fly around 90 kids from Europe and Asia to The Greenbrier for our second grand final at The Greenbrier. That runs up a serious bill when we do that!

You must be delighted by the progress of your Faldo Series, which since its inauguration in 1996 has now branched out to more than 30 countries worldwide?

It's expanded well. Once we took the model to Asia which was a good 10 years ago now, that really expanded. We now play in about 34 countries with over 40 events out in the likes of Australia, New Zealand, Bangladesh, Cambodia, so some really interesting places.

The Series gives all these kids the opportunity to win their local event and then travel and play in a grand final, which they love. The coolest thing from the Series is that it's an experience where these kids are being thrown in at the deep end. For some of them, they'll be playing golf when they should be fast asleep, they'll be playing in a completely different humidity to what they're normally used to and they'll also be playing on different grass. They get a taste of top amateur and professional golf and it's an all-round great test.

Moving onto Rory McIlroy, a past pupil of the Faldo Series, and his Open Championship triumph two weeks ago, what did you make of his performance at Royal Liverpool?

Stunning. When Rory gets on this roll, you can see in his strides that he gets that confidence and ability to play. The way he finished on the Saturday with two eagles is stunning stuff. I used to call them 100 per centers, you can’t do any better than that to throw those two eagles in and take command of the tournament. That gave him the confidence going into Sunday but he gets like that. I talk to him a lot. He used the word 'comfortable' in pretty much every sentence at the Open... ‘I’m comfortable with this, I’m comfortable with that’. When he gets that self belief and buzz, he’s fearless and incredible to watch.

Colin Montgomerie last week claimed Rory will soon replace you as Britain’s greatest ever player. Would you agree with that?

Yeah, let me have a real hard think about that one... err, yes! The way Rory's going right now with three majors he's on track and you’ve got to believe he will go close again at the PGA Championship.

I won my first major at the age of 30. I hope he only goes on to win his seventh when he’s maybe 31! The sky's the limit for him. He's won three in four years so if he keeps on that same track, who knows what could happen over the next 10 to 15 years. It will be very interesting.

Who would you say is the best player never to win a major championship right now?

I always think this is a funny question. Winning a major is a fifth element or 15th club. There are a lot of talented guys out there. On paper, Sergio Garcia and Lee Westwood are the current ones out there as they've played 60-plus majors, but in truth, I think it’s a daft question. There’s a reason why you don’t win and that's the real bottom line to it.

If I was to generously give you a fiver, which player would you lump it on for the upcoming PGA Championship?

I did a piece for CBS recently and we were all offered one pick so I took three. I went for Justin Rose, Henrik Stenson and Rory. For a dark horse, I like Angel Cabrera. He's been playing solid recently and he's a dangerous man especially in the heat. It’s going to be stinky hot. Valhalla in August, wow, yeah it will be hot.

I'm only giving you a fiver, Sir Nick...

Interview continues. Find out what Sir Nick makes of Tiger Woods right now and whether or not he feels US Ryder Cup captain Tom Watson will present the 14-time major champion with a wildcard pick for Gleneagles?