Brooks Koepka: "I drove the ball great, I LOVE MY DRIVER!" 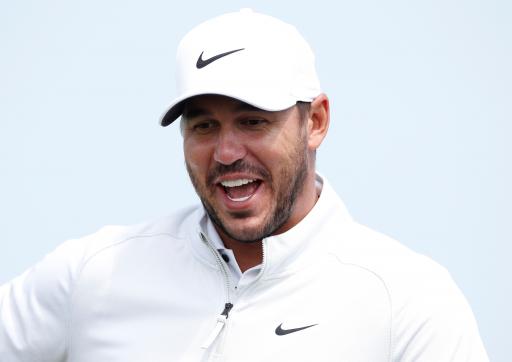 Brooks Koepka fired yet more shots the way of Bryson DeChambeau on day two at The Open by telling Golf Channel just how well he drove the ball and how much he loves his driver.

Koepka, who unlike DeChambeau is not sponsored by a club manufacturer and is a free agent in the equipment world, posted a solid round of 4-under 66 on Friday, closing out with three consecutive birdies to creep inside the top 10 after 36 holes.

"Drove the ball great, love my driver," said Koepka, who uses a TaylorMade SIM2 driver, but is not paid to do so by the company as he is a free agent.

He then also posted the following on his Instagram page...

DeChambeau was soon ripped by Cobra Tour rep Ben Schomin after learning of his comments about his driver on day one.

"Everybody is bending over backwards," Schomin told Golfweek this afternoon.

DeChambeau has since apologised for his words with an apology on his Instagram page.

"With time to reflect on his post-round press conference earlier in the day, DeChambeau posted on Instagram just after 10.30pm on Thursday evening to apologise for his rant.

"My frustration and emotions over the way I drove the ball today boiled over.

"I sucked today, not my equipment. Cobra and I have worked together for over five years and they are some of the hardest working people in the golf industry and make an incredible product.

"Their team is like family to me, especially Ben Schomin who has been there for me every step of the way since I started my career.

"I deeply regret the words I used earlier. I am relentless in pursuit of improvement, and perfection.

"Part of that causes me to become outwardly frustrated at times. With the new speeds I am obtaining, my game is a constant work in progress and so is controlling my emotions."