Bryson DeChambeau hit an iron off the tee box in his first round of The Open Championship, but the fans wanted to see something different today. 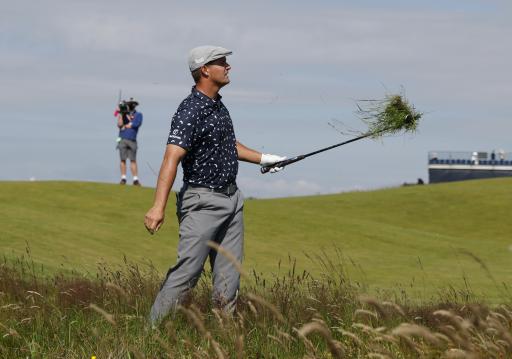 Bryson DeChambeau received boos from the crowd at The Open Championship on Friday when he pulled an iron out of his bag for his shot on the first tee box.

It is not every day that a British crowd get to see DeChambeau and his big-hitting power so they were disappointed when he opted for the safe option to get his round underway.

The World No. 6 did the same thing on the first day on Thursday, which is not surprising if you have seen the number of players that have found the deep rough to the right of the fairway.

But after his opening round of 1-over-par yesterday, DeChambeau revealed that he did not like the driver that he has in his bag, which caused some controversy and reaction.

The 2020 US Open champion voiced concern about his current Cobra driver after finding just four of 14 fairways on day one, telling the media during his post-round conference "the driver sucks."

RELATED: COBRA REP ON BRYSON: "IT'S REALLY PAINFUL WHEN HE SAYS SOMETHING THAT STUPID!"

A Cobra representative named Ben Schomin, who caddied for DeChambeau at the Rocket Mortgage Classic two weeks ago, responded to the big-hitter's comments last night.

"Everybody is bending over backwards," Schomin told Golfweek yesterday.

"It's just really, really painful when he says something that stupid."

DeChambeau has since apologised for his comments on his driver, saying that his actions were "unprofessional" and his "emotions boiled over."

NEXT PAGE: BRYSON DECHAMBEAU "REGRETS" SAYING "THE DRIVER SUCKS" AT THE OPEN