Bryson DeChambeau was FUMING with his driver on day one at The Open... 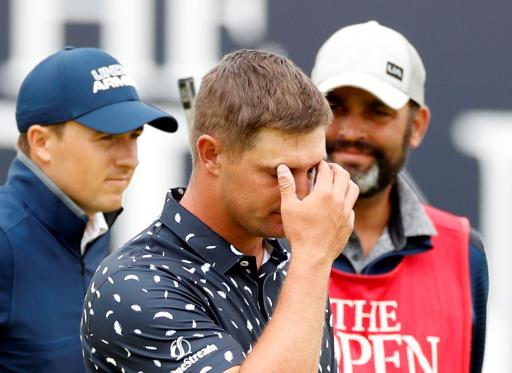 Bryson DeChambeau ripped into his Cobra King Radspeed driver after opening with a disappointing 1-over 71 on day one of The Open Championship at Royal St George's.

DeChambeau, 27, bemoaned the state of his driving performance in a first round that saw him find just four of 14 fairways.

"If I can hit it down the middle of the fairway, that's great, but with the driver right now, the driver sucks," said DeChambeau, who was using a Cobra King Radspeed driver in 5 degrees of loft, 46 inches long and with an LA Golf Tour AXS Blue 60 X shaft on day one.

"It's not a good face for me and we're still trying to figure out how to make it good on the mis-hits.

"I'm living on the razor's edge, like I've told people for a long time. When I did get it outside of the fairway, like in the first cut and what not, I catch jumpers out of there and I couldn't control my wedges.

"It's quite finicky for me because it's a golf course that's pretty short, so when I hit driver up there and it doesn't necessarily go in the fairway and ends up in the first cut or whatever, or in the hay, it's tough for me to get it out and onto the green and control that.

"But when it's in the middle of the fairway like I had at 18, I was able to hit a nice shot in there to 11 feet and almost made birdie."

DeChambeau had been using a Cobra LTD Pro driver earlier in the season and only recently switched into his newer King Radspeed model.

NOW WATCH: BRYSON FIRES BACK AT JOURNALIST WHO CLAIMS HE RARELY EVER SHOUTS 'FORE'