Scotland's Richie Ramsay is clearly not a fan of Ian Poulter right now! 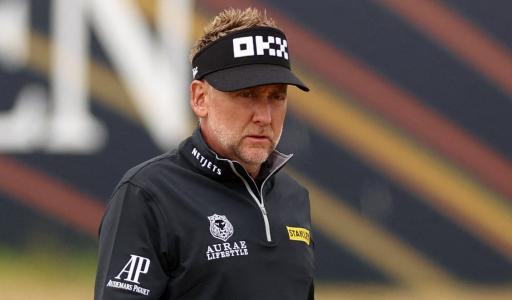 Richie Ramsay is clearly not a fan of Ian Poulter right now, at least judging by his response to one of Sky Sports Golf's Twitter posts on day three at The Open.

See Ramsay's reply and Poulter on the Open mic in the post below:

Poulter was playing alongside Sam Burns in round three at The Open.

In the clip shown by Sky Sports Golf, the Englishman was laughing at seeing the American out-drive him by 40 yards on one of the holes.

Poulter then turned to his caddie: "There's your 2 yards every year, he's 26 next week. Ah dear, old man, young man."

Sky Sports Golf tweeted: "Can we get more of Ian Poulter on The Open Mic please?"

Ramsay replied: "No thanks".

Despite the distance gap off the tee on that particular hole, Poulter shot a 70 and Burns shot a 77 to tumble down the leaderboard.

Now we cannot be certain as to exactly why Ramsay is not a fan of Poulter at the moment, but there is a strong chance it has something to do with Poulter's connection to LIV Golf.

Poulter has played in the first two LIV Golf tournaments at Centurion and Portland, and he plans to play the rest of their tournaments this season.

The LIV Golf Invitational Series has caused plenty of controversy in recent months in the sport as a result of it being funded by Saudi Arabian money.

Poulter, along with other PGA Tour players, has been banned from competing in PGA Tour events as a result of his ties to LIV Golf.

The European Ryder Cup star won his legal challenge against the DP World Tour two weeks ago, which allowed him to play in the Scottish Open.

On June 24, the DP World Tour confirmed it would be banning its members that competed in LIV Golf events from playing in the Scottish Open, as well as the Barbasol Championship and the Barracuda Championship, which are all co-sanctioned with the PGA Tour.

All DP World Tour members that competed in any of the Saudi-funded LIV Golf tournaments thus far were also fined £100,000 after going against their rules.

But a hearing before HHJ Sycamore (an independent UK body) earlier this month determined that Poulter - as well as Justin Harding and Adrian Otaegui - were allowed to play at Renaissance Club.

Poulter would go on to miss the cut at the Scottish Open.

Next Page: Ian Poulter gets touchy with a journalist after being questioned about "boos" received at The Open