"How can you not root for Rory?": Scottie Scheffler on St Andrews fan favourite

Scottie Scheffler may be fighting for the Claret Jug at St Andrews this weekend, but he is well aware of who the patrons want to win The 150th Open Championship. 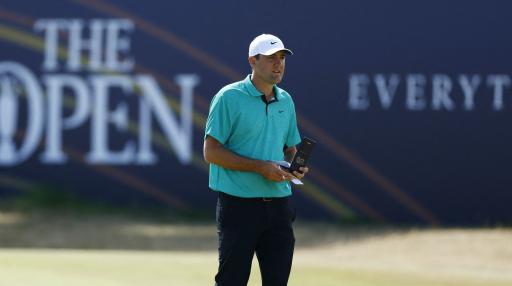 World No.1 Scottie Scheffler is under now illusion. He knows who the crowd want to win The 150th Open Championship on Sunday and it isn't him.

After a third-round 69, Scheffler will begin the final round five shots behind Rory McIlroy and Viktor Hovland. He has a tough task to turn the five-shot tide, but The Masters champion is well capable.

But he isn't just chasing down any old player. He will be the pantomime villain if he was to topple McIlroy on the Old Course later today as destiny is calling for the Northern Irishman to win The Open at the home of golf.

Scheffler got a taste of the support that McIlroy has in Scotland this week when he holed out of the sand for an incredible eagle on the short par-4 10th hole on Saturday. This shot put McIlroy in the outright lead for the first time.

Related: The Open: Matt Fitzpatrick "not really a fan" of Old Course at St Andrews

"I couldn't really see. The cameras were in the way. We saw his ball roll into the bunker, so we were wondering what part of the bunker it ended up in. It was really loud there for a minute or so, which was pretty funny," the 25-year-old said after the third round.

"Isn't it Rory (the home favourite)? I was like, they're chanting his name out there. I think he's definitely a crowd favourite. How can you not root for Rory?"

Scheffler is just one name on what is a world-class leaderboard for the final major of 2022. He, McIlroy, Viktor Hovland, Cameron Smith and Cameron Young are all in with a chance of winning the Claret Jug.

The American made five birdies but two unfortunate bogeys on the 12th and 17th holes on Saturday. He reached 11-under-par and he will be in the third-to-last group out with Si Woo Kim later today.

It may be one step too far for Scheffler who will need a score in the low 60s to win his second major of the year. However, another good week has solidified his place at the top of the world rankings, victory or not.

Next Page: DP World Tour pro says "NO THANKS" as Sky Sports ask for more Ian Poulter on mic