Ian Poulter was left frustrated on Saturday when he was asked about being booed during The Open this week, despite this being only a minority of fans. 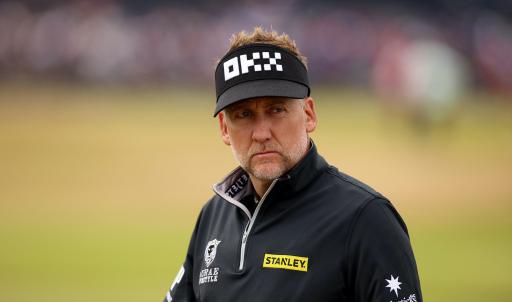 LIV Golf rebel Ian Poulter was frustrated at the constant talk of being booed during The 150th Open Championship despite the jeers coming from a minority of spectators.

When he was announced for his opening tee shot on Thursday and Friday, Poulter was booed by a small number of spectators for his involvement in the LIV Golf Invitational Series.

The Englishman almost hit his first tee shot in the first round out of bounds, but the boos haven't seemed to deter him from reaching 5-under-par for the championship heading into the final round.

Poulter was asked about the comments he heard from fans this week, but he was in disbelief that this discussion was ongoing and he complimented the thousands of fans who've flocked to St Andrews.

"To be honest, every hole has been great. We've had, because of the way the golf course shapes itself, they're kind of one side or the other side the whole way out and the whole way back in," Poulter said after his third-round 70.

"You only allow them to come in around the loop, where they can kind of get in and have some food and stand in the stand. But the support's been amazing.

"It's amazing how we still talk about one person that's 100 yards down the first (hole), where there's conveniently a microphone positioned way down halfway down the stand and some young guy says boo, and it comes over on the TV. And you all assume I'm being booed on the course.

"You just walked, Phil Casey walked 17 holes on day one. He's not here, but he was standing here the other day. And the 17 holes he walked, there was not one comment. There was not one boo.

"If you guys continue to write that there are people and there's negative comments and there's boos, then unfortunately that's not a true reflection of exactly what happened.

"It would be a fair reflection of actually what's happening, rather than this continual press of let's lead down the path of players being booed who have joined the LIV tour. Let's just say that, right? Fair, respectful, honest journalism would be great because it would be the truth."

Poulter has played in both LIV Golf Invitational events so far, as have other players in the field this week, but it seems the 46-year-old is the only one to be booed.

He gained an entry to the Genesis Scottish Open after appealing his suspension from the DP World Tour. At the first LIV Golf event at Centurion Golf Club in June, he told the media he would be prepared to start a legal battle to regain his tour status.

Next Page: The Open: When do Rory McIlroy and Viktor Hovland tee off on Sunday?