Tiger Woods talks about what Rory McIlroy and others did as strolled down the 18th and signed off his week at St Andrews. 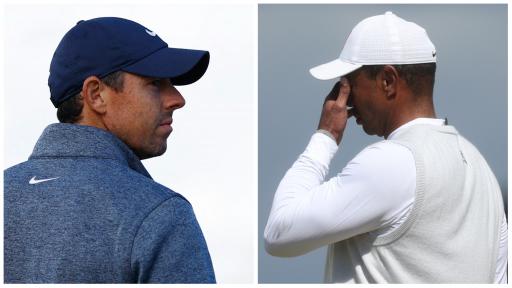 Tiger Woods has told how Rory McIlroy's cap tip started his tears as he strolled down the 18th hole for very possibly the final ever time in The Open at St Andrews.

It was almost like a "meant to be" moment as Woods played the 18th as McIlroy walked down the 1st, holes which share the same fairway.

McIlroy's cap tip while the roars got louder from thousands of golf fans was all it took for Woods to be hit right in the feels.

WATCH WHAT RORY DID BELOW

A tip of the cap from Rory as Tiger walked down 18.#The150thOpenpic.twitter.com/AWYhayGBu9

"As I walked further along the fairway, I saw Rory right there. He gave me the tip of the cap," Woods told the media after missing the cut on 9-over par.

"It was a pretty cool -- the nods I was getting from guys as they were going out and I was coming in, just the respect, that was pretty neat. And from a players' fraternity level, it's neat to see that and feel that.

"And they all had appreciated what I've done here for the years I've played -- I've won two championships here -- my British Open success and all my times I've enjoyed here in Scotland and playing, I felt like it just came to a head right there as I was walking to my golf ball."

Woods, who won two of his three Opens at St Andrews, has made it clear down the years that the Old Course is his favourite track in the world.

Now at the age of 46, and 51 when the next Open at St Andrews potentially swings around in five years time at the very earliest, Woods knows this may have been the final time he plays at the Home of Golf at least in competition.

"I had a few tears," said Woods, who continues to recover from leg injuries sustained during his horror car crash in Los Angeles in February 2021.

"I'm not one who gets very teary-eyed very often about anything. But when it comes to the game and the passing on of -- just the transition, I was lucky enough in '95 to watch Arnold hit his 1st tee shot in the second round as I was going to the range.

"I put my heart and soul into this event over the years. And I think the people have appreciated my play in the event. I've won it three times. And to have Peter Dawson say it all three times was pretty neat.

"Life moves on. And I think that's what people understand. And they knew my circumstances this year, of just playing, period. I was very lucky to have had a great team around me to get me to where I was physically able to play three times this year and very thankful to all of them for getting me to this spot."

Of watching Woods stroll down 18, McIlroy, who carded a 68 to move into third place on 10-under par, said: "It would have been a cool moment if he was 8-under par instead of 8-over (he was 9-over), whatever he was. A little bit. Yeah, I just hope -- everyone hopes it's not the end of his Old Course career. I think he deserves, we deserve him to have another crack at it.

"Hopefully The Open's back here in four or five years' time and he does get another crack at it because with how good he's been throughout his career and how good he's been at The Old Course, I think that's not the way about him he's got better in him."

Max Homa, who was playing alongside Woods and Matt Fitzpatrick, took to social media to explain just how special the moment was for him watching his childhood hero take the walk down 18:

Typically after a missed cut u hope to flush it from ur memory. But not this one. This was pretty unforgettable. Incredibly bummed to not be playing the weekend but endlessly thankful for the 2 days with Tiger at St Andrews. That walk up 18 was a movie pic.twitter.com/TN34wEBWds

Next Page: Tiger Woods in tears as he walks down the 18th at The Open