The Open R2: Cameron Smith races to the front, Rory McIlroy in contention

Australia's Cameron Smith fires a stunning 8-under 64 to vault to the top of the board at The Open, but Rory McIlroy remains in hot pursuit of his first major title since 2014. 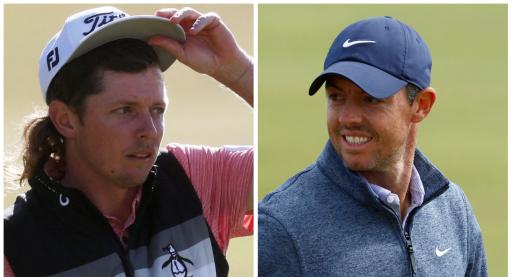 Cameron Smith vaulted to the top of the leaderboard on day two of the 150th Open Championship - but Rory McIlroy very much still remains in the hunt for a first major victory in eight years at St Andrews.

Smith, who won the PGA Tour's flagship Players Championship earlier this season, carded a superb round of 8-under 64 to move to 13-under par and two shots clear of round-one leader Cameron Young (69).

The Australian's 36-hole total is a record low in Open Championship history on the Old Course at St Andrews.

Smith has won five times on the PGA Tour in his career, and twice already this season, but he is now seeking the greatest win of them all and a first major title at the Home of Golf.

Young, who birdied the last to move two shots back on 11-under par, is also looking to land his first major title but he did have a taste of things to come recently with a tie for third at the US PGA Championship.

Starting the day three shots off the pace, Smith raced out the blocks on day two with three straight birdies and then he moved serenely into the outright lead with birdies at 7, 8 and 10.

The highlight of his round then came at the par-5 14th when draining a 50-footer from right to left for eagle.

Smith admitted after his round to thriving when conditions get firm and fast.

"I think most Aussies are, for some reason. I think we're all brought up to be smart golfers, hit away from the pin sometimes. And that really serves us well, I think, in big tournaments and when the conditions get tough."

But a host of star names are lurking in the wings, one of which is McIlroy.

The Ulsterman did not have his best stuff out there on Friday but he certainly remains in the race for a first major title since the 2014 US PGA Championship, a year that also saw him win his only Open Championship to date at Royal Liverpool.

Starting the day on 6-under par and two shots off the pace, McIlroy opened with four straight pars before making birdie at the 5th and 7th.

He handed one back at the par-3 8th but then made three birdies in a row from the 10th to get himself right back in the mix.

A birdie on the Road Hole?

McIlroy would make a disappointing par at the reachable par-5 14th and then three-putt for bogey at the tricky 15th.

But he bounced back in style when holing a 20-footer for birdie on the treacherous par-4 'Road Hole' 17th.

McIlroy could not get up and down for birdie on the short par-4 18th but it all added up to a round of 68 and a 10-under par total to sit alongside Viktor Hovland (66) in a tie for third.

Hovland arguably hit the shot of the week so far when holing out for eagle on the par-4 15th.

Two-time major champion and now LIV Golf player Dustin Johnson bumped himself up to 9-under par after a 67 and he finds himself one shot ahead of England's Tyrrell Hatton (68), twice a winner around St Andrews in the Alfred Dunhill Links Championship, and World No.1 Scottie Scheffler (68).

US Open champion Matt Fitzpatrick carded a solid 66 to move to 6-under par.

Tiger Woods produced the most emotional scenes of the week so far as he signed off with a 3-over 75 to finish 9-over par, in what could end up being his final ever round on the Old Course at St Andrews, his favourite course of them all.

Woods was reduced to tears as he walked over the Swilcan Bridge and down the fairway. After the round, Woods said: "This might be my last Open here."

Defending Open champion Collin Morikawa missed the cut by shot on 1-over par, as too did Brooks Koepka (4-over par) and Phil Mickelson (5-over par).

There have been rumours in recent weeks that Cameron Smith could be one of the next star names to sign up for his compatriot Greg Norman's LIV Golf Invitational Series, but we will have to see how that one plays out.

LIV Golf are supposed to be revealing at least one big new name to its new Saudi-funded circuit - but only after the completion of The Open.

Norman, who was disinvited from the Celebration of Champions event by the R&A this week, did not want to announce a new name for LIV Golf out of respect for the 150th Open Championship.