Justin Thomas found the humour in this dry comment from Shane Lowry at the 150th Open Championship. 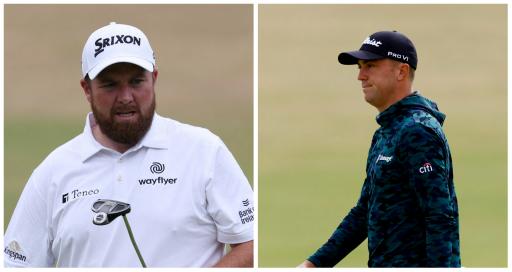 Justin Thomas did something that he did not want to do playing the 150th Open Championship at St Andrews.

Not many players this week will give themselves 125 yards into the 18th hole at the Old Course.

But that's exactly what the two-time major winner did on day one of the landmark and final major of the year.

Was it some tactical decision by the 29-year-old American? Has he found out something about the Old Lady that the other players have not?

No, the answer was in fact that Thomas just topped his tee shot. He couldn't decide between a 5-wood or a 3-wood. Turns out, it didn't matter.

"Cold topped it," Thomas wrote on Twitter later that evening. "Landed short of the burn. Had 125 in. Nice."

Well, that's a pretty funny reaction if I do say so myself. You have to have the ability to laugh at yourself when you do something like that.

Thomas had to grind really hard to make the cut. He was 2-under as he pegged it up on the 18th yesterday, comfortably inside the cut.

This tee, shot, however, was a little bit different. Thomas actually piped this one straight down the middle of the fairway.

Justin Thomas topped his tee shot on 18 Thursday. Little better during the 2nd round.

Couldn’t decide if 3w was too much on 18 or if it was a flat 5w. Seemed like a perfect 5w downwind. Cold topped it. Landed short if the burn. Had 125 in. Nice #onward

More: Phil Mickelson agitated by reporter at The Open

Lowry found the funny side of it all and chimed: "Most improved!"

We don't suppose the R&A will appreciate that language being picked up on the mic, but still, that's really funny.

Thomas made a comfortable par to sign for a second round of 70.

Lowry also made it through to the weekend, as did their playing partner Viktor Hovland.

Next page: What Rory McIlroy did to start Tiger Woods' tears