Tiger Woods in tears at St. Andrews: "This might be my last Open here"

Tiger Woods says he hopes to play more majors but the 150th Open Championship at St. Andrews "might be my last here." 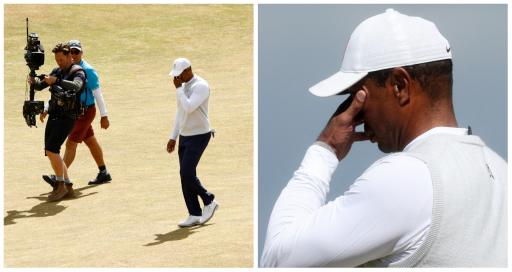 Tiger Woods' 150th Open Championship at St. Andrews ended with tears over the Swilcan Bridge and a dream he might make it back here.

Woods began his week with hope that he could manufacture one last great run at golf's oldest major but he never really recovered from a poor start.

He found a fresh, sandy divot with his opening tee shot at the Old Course and then the water with his next. It never really got any better.

There was hope Woods could find some magic of old to try and make an unlikely cut. The fire still burns, but the body and mind are not connecting.

Woods fared better than yesterday, but he ended his championship at 9-over par and well outside a projected cut of level par.

The 46-year-old, 15-time major champion made two solid pars to start his day alongside Max Homa and Matthew Fitzpatrick.

A birdie at the third rekindled some hope.

But he gave that shot straight back the fourth hole, then dropped another at the sixth hole to turn in 1-over par.

Woods made par at the Road Hole then sent his tee shot short of the 18th green.

And that's when the tears started to flow for Woods. How fitting a goodbye was this?

As Woods strode over the Swilcan Bridge, he took his cap off and thanked the crowd.

Tiger, we hope to see you at St Andrews again

Although I am disappointed to be heading home, I had an incredible week at St Andrews celebrating 150 years of history and the game we love. I want to thank this place for all the memories it has given me, and to the fans today for having the walk up 18 be added to that list. pic.twitter.com/VHD93MfeSl

His playing partners Fitzpatrick and Homa stood well back to allow him to receive the applause he rightfully deserves.

As Woods got to the green, he took his cap off again. Was this a goodbye to St. Andrews or goodbye Open?

Playing the first hole nearby, Rory McIlroy tipped his cap to Woods. Xander Schauffele and Collin Morikawa, too, paid their respects.

Woods covered his face as he teared up. After sending a delightful chip next to the pin, his birdie putt burned the edge. Just summed up his week.

Still, if that was goodbye, then what a way to go.

Speaking immediately to Sky Sports afterwards, Woods said he made his fair share of mistakes this week and he struggled to get a feel around the greens.

"Never got anything going," he said.

Still, he stopped short of talking up any retirement.

He said: "This felt like it might be my last British Open at St. Andrews. I feel like I'll be able to play future British Opens...just maybe not round here."

Next page: The most unlucky shot you will ever see at The Open?