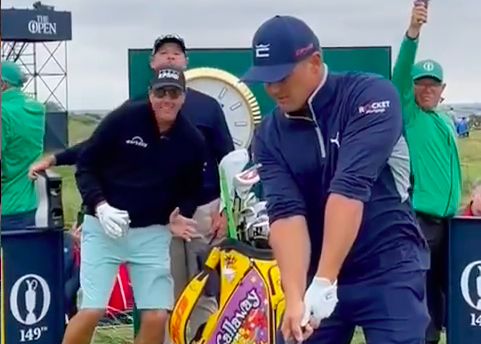 The practice days are over and the 149th Open Championship has begun today at Royal St. George's in Kent.

Yesterday, the players put in their final practice drills on the golf course and the driving range to make sure they were ready to go to war with the dunes and bumpy fairways in Sandwich.

There were some great groups to follow on Wednesday, one of them being a group that included Phil Mickelson and Bryson DeChambeau, who faced off last week in The Match.

On the 9th tee box, which is a tricky par-4, DeChambeau was taking aim with his driver and while the camera was filming the 27-year-old, Mickelson did a little dance in the background.

Lefty really is enjoying himself on the PGA Tour this season and he has shown this with a carefree, laid back attitude. This approach was arguably integral to helping him win the PGA Championship in May.

Although Mickelson was having a little jig in the background, DeChambeau no doubt striped another drive down the fairway which is what we will be seeing a lot of in these coming days.

"The Marshall’s reaction at the end is priceless," one fan said.

"Is that a beer Phil," one fan commented.

"Seems to be having fun at this point of his career, that's all that matters," another fan commented.

"This is why Phil is my favourite!" one fan said.