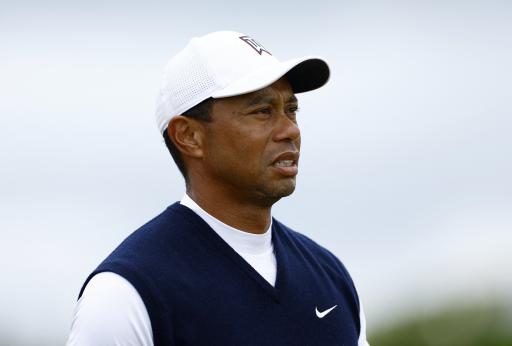 The big cat had a dramatic start when he found the water with his second shot of the landmark major.

If there were any nerves for Woods, he didn’t illicit them on the first tee.

He took a gentle stroll from the putting green over to the first tee in front of The Royal and Ancient Clubhouse to a rapturous reception and hit his famous stinger at the Old Course.

But from there it all went a bit pear-shaped for the 15-time major champion, who has won three Opens – two of which were at The Home of Golf.

Woods cut a frustrated figure as he saw that his golf ball had unluckily found a divot. Taking a swipe at his approach, he caught a face full of sand and watched his golf ball pitch before the Swilcan Burn.

It then hopped into the water.

9 years ago, Max Homa tweeted asking Tiger Woods for a practice round.

Today, he is getting much much more than that, teeing off with him at the 150th Open Championship! pic.twitter.com/yN1nm9yeNe

From there, he chipped to approximately three feet and looked like he was going to tidy up a bogey but pushed his effort wide.

That thing didn’t even skirt over the lip.

A collective groan could be heard from the crowd as Woods trudged off the green with his score at 2-over par after one hole.

There was no sign of Woods’ edgy start dissipating as he pulled his second tee shot slightly left and then he went far too big with his approach, leaving himself 55 feet to try and get down in two.

He almost holed it and walked off with a par.

This is going to be an entertaining week.

Do you think Tiger Woods will make the cut? Let us know on our social media channels.

Next page: Why Phil Mickelson skipped champions' dinner at The Open