Ian Poulter was involved in a tense press conference over his involvement with LIV Golf at the 150th Open Championship. 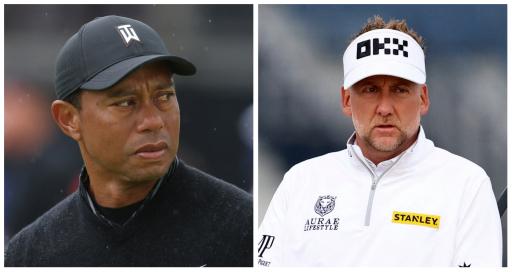 Ian Poulter was involved in a tense press conference where he fought back over some of the criticisms he has faced since joining LIV Golf after the first round of the 150th Open.

The Englishman, 46, had a rather interesting start to the landmark major when he almost missed the famously wide fairway at the first hole of the Old Course.

Poulter told the media that “is not really what you want” as the LIV Golf player was only about five feet or so from going out of bounds.

Still, he settled his nerves with a par and then eased into his round. He ended up carding a 3-under par opening round that included a monster eagle putt on the ninth hole.

Speaking after his round, Poulter was asked about the reception he received when he was announced on the first tee at golf’s oldest major.

There was a couple of boos that were picked up by mics on Sky Sports’ coverage. Poulter, though, “didn’t hear one”. “I actually thought I had a great reception on the first tee, to be honest,” he said.

“All I heard was clapping.” One reporter put it to The Postman that he received the odd bit of heckling.

He fired back: “Oh my gosh, I have heard not one heckle in three weeks, I’ve heard nothing. What have you heard?”

Poulter told the reporter: “You walked 18 holes. Not one noise. You lot can write whatever you like about being heckled and booing.

Poulter was asked what the reception has been like from his fellow players.

Off the back of Woods’ comments, England’s Eddie Pepperell posted on Twitter: “Not a day goes by where I don’t feel disappointed by the easy route these guys have taken. Shows a desperate lack of character.”

But Poulter disagrees: “I've heard great comments, great talks with everyone. We might have a difference of opinion, but they're my friends.

“You play golf with these guys for 20-plus years or 10, 15 years, you've been part of many teams with them.

“Even if they have a difference of opinion, that's that. We all have opinions, right? We're still friends, whatever the landscape is and wherever you're playing golf.”

Before the major began, R&A chief executive Martin Slumbers said it was not on their agenda to ban LIV Golf players.

But he did say “there’s no such thing as a free lunch” as he explained the R&A would look at the qualifying criteria going forward.

Slumbers said the LIV Golf model was “not credible” and “not merit-based”.

“[I] purposely haven't looked at all [at the comments Slumbers made].

“This could probably be my last Open Championship at St Andrews. So, I'm trying to enjoy it despite the questioning.

“I'm staying out of the way. I'm not reading social media. I just want to play golf, right? I can only do my job.

“If I listen to a lot of nonsense, then I'm going to get distracted. That's never going to be good for me.

“I'll leave it to the clever people to figure stuff out, and I'll just play golf.”

More: Justin Thomas opts for interesting outfit at The Open

Poulter said it was inevitable for negative comments to be made on social media “from those brave people behind the scenes”.

He said that he’s always had respect for his peers and that will continue.

“So even the people that have been vocal have been pretty decent to me,” he said.

“So, whether they accept that I'm an old fart or not and let him go about his merry business the way he does, I don't know. I've only had good comments.

“Even Thomas Bjorn, of all people. Thomas is Thomas. He's extremely vocal. We disagree, but we're friends, right? It's nice that we have that level of respect between golfers and as friends.

Poulter said he had “no idea” when asked if he thought Old Tom Morris would be “turning in his grave” after what has happened in professional golf over the last couple of months.

He also confirmed he had not read Woods’ comments.

“I haven't read. I'm not here to comment on other people's comments. I haven't looked at comments this week.

“I haven't read any articles this week. It's for everyone else to comment on.”

Poulter came into the week off the back of a disappointing performance at the Genesis Scottish Open, of which he had to take legal action against the DP World Tour to compete.

He said that he wasn’t surprised with how he played, and he was “deeply disappointed with how I handled everything from a perspective of losing focus out on the golf course more than anything else.”

Still, there was a moment of light relief before Poulter departed his press conference.

Poulter’s reaction to seeing his monster eagle putt was priceless as he pretended to ask if it dropped.

Of course, he saw it drop.

Next page: LIV Golf with an own-goal over Open post