Rory McIlroy shot level-par on the first day of the 2021 Open Championship to sit six shots behind leader Louis Oosthuizen. 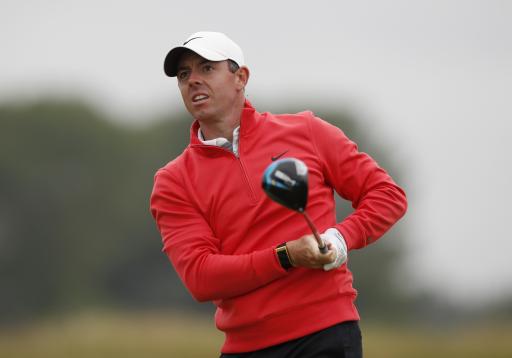 Rory McIlroy battled his way through the back nine at Royal St. George's to shoot level-par in the first round of the Open Championship.

It looked as though it could be a great day for the Northern Irishman from the way he started, with a great birdie on the 1st hole and almost another one on the 2nd hole.

But things took a turn for the worst as he made three consecutive birdies on holes 5, 6 and 7 and it looked as though the old problems were re-emerging for McIlroy.

The 2014 Open champion made another bogey at the long par-3 11th hole, but he fought back with birdies at the 14th and 18th holes to finish on level-par.

It's not been Rory's finest day.

But this is just brilliant!

His birdie putt on the 18th hole could be vital for his confidence heading into the second round, as it was important for McIlroy to finish on a positive note.

His playing partner and Ryder Cup opponent Patrick Reed finished on 2-over-par, while Australian Cameron Smith finished with a 1-under-par 69.

McIlroy is six shots adrift of the leader Louis Oosthuizen, who once again finds himself at the top of a major leaderboard on 6-under-par.

The 2010 Open champion made six birdies on a bogey-free card to finish with a 64, which is one shot ahead of Jordan Spieth and Brian Harman.

After a bogey on the tough par-3 3rd hole, Spieth bounced back with four consecutive birdies from hole 5 to hole 8 to play the front nine in 3-under-par.

The 2017 Open champion then added further birdies at the 15th and 16th holes to finish with a score of 5-under-par to finish one shot behind Oosthuizen.

The Open
Rory McIlroy
royal st.george's
Jordan Spieth
Louis Oosthuizen
Previous
Cobra rep on Bryson: "It's REALLY PAINFUL when he says something THAT STUPID!"
Next
Phil Mickelson makes WORST EVER START to major tournament on day one at The Open