After Tiger Woods and Justin Thomas played a round together at the home of golf, Woods joked with his younger friend that he'd never won The Open... 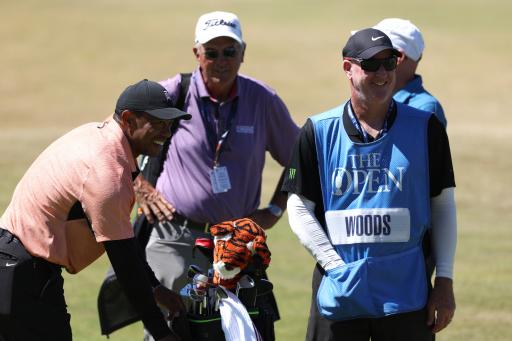 Since the comeback of Tiger Woods in 2022, his flourishing friendship with two-time US PGA champion Justin Thomas has become clear for all to see.

Thomas, no doubt, picked the brains of the 15-time major champion throughout their practice round together on Sunday as he looks to win The Open Championship for the first time.

Woods has won The Open three times and two of his Claret Jugs were won at the home of golf. He has purposely prepared his ageing and injured body for this week.

It looks like Woods enjoys reminding Thomas of the absence of a Claret Jug in his trophy cabinet as The Open cameras captured a hilarious comment from the 46-year-old.

Tiger to JT at end of vid: “See you tomorrow for the past winners event. Oh no, I forgot you’ve never won here.” pic.twitter.com/OdNyhWxhPq

"See you tomorrow for the past winners' event - Oh no I forgot you've never won here," Wood said in Thomas' direction with an evergrowing smirk on his face.

The 29-year-old just returned with a smile and silence. The comment was met with laughter from the various members of each player's team. Could Thomas make Woods eat his words come Sunday afternoon?

The past champions' event that Woods was referring to was the Celebration of Champions tournament which sees a number of male and female professionals, veteran Open winners and disabled golfers compete in teams over four holes of the Old Course.

The tournament will be played over the 1st, 2nd, 17th and 18th holes. Tom Watson, Sir Nick Faldo, Dame Laura Davies, Mark O'Meara and John Daly are just a handful of participants also playing this afternoon.