Bryson DeChambeau didn't need his driver on some holes during his first-ever round on the Old Course ahead of The 150th Open Championship. 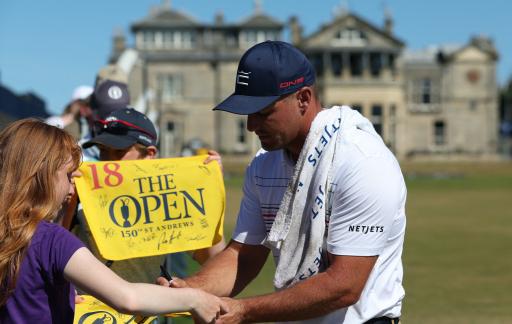 Bryson DeChambeau has played the Old Course at St Andrews for the first time ever and like everyone else who walks the famous links, he loved every minute of it.

Speaking to Sky Sports, the 28-year-old was beaming in the sunshine ahead of playing in The 150th Open Championship. This is DeChambeau's third major of the year and you could argue it's just the second one he's taking on injury-free.

He shot an 80 in the second round of The Masters when he was arguably still injured and he didn't compete in the US PGA Championship due to his ailing wrist.

The big-hitting American admitted he was making his debut at the home of golf this week and he engaged with the fans as well as engaging with the dry fairways and greens.

"It feels a little bit like California, back where I grew up. I've definitely had a warm welcome and the fans are awesome. This is my first time around the course and man, it's a special place," DeChambeau said.

"There's no better place in the world. I love it"

"There's no doubt about that. It's tricky, the wind flipped from one direction to 180, so (I'm) getting comfortable with that and making sure we have our wind numbers dialled in is going to be key to playing well.

"This morning was my first time so I'm very blessed to be able to get around this golf course. I wish it would've been earlier, but I'm excited to be here and there's no better place in the world. I love it."

DeChambeau also said that during his practice round, he didn't need his driver to reach some of the par-4s in one. St Andrews will certainly need the wind to protect itself this week.

Although the former US Open champion has defected to the LIV Golf Invitational Series, a series surrounded by controversy, the fans still flocked to see DeChambeau on Monday in Scotland.

He has never finished inside the top 30 of The Open since his debut in 2017 and he has only appeared seven times on the PGA Tour this season, including one start in the LIV Golf Series.