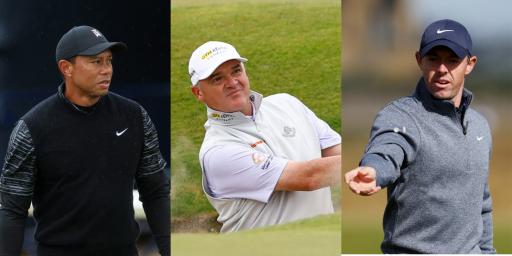 The Royal and Ancient Golf Club of St Andrews will welcome Tiger Woods, Rory McIlroy and Paul Lawrie as Honorary Members in 2022.

Woods has won The Open Championship three times in his career with his first victory coming in 2000 at the home of golf. This is seen as one of his most significant victories.

He added his second Claret Jug in 2005 at St Andrews and he defended his title at Hoylake the year after. He is a 15-time major champion and he has won 82 times on the PGA Tour.

Woods holds the record for the most weeks (683) ranked number one in the world and he was inducted into the World Golf Hall of Fame in 2021.

"I am grateful for this invitation to become an Honorary Member of The Royal and Ancient Golf Club of St Andrews. It is not only the home of golf but a place in this world that I hold near my heart," said Woods.

"I am humbled to accept this invitation alongside these outstanding players today, as well as those who came before us."

McIlroy is returning to The Open at St Andrews for the first time since 2010. He came tied third behind Louis Oosthuizen that week but it was four years later when he tasted success at golf's oldest major.

The Northern Irishman beat Rickie Fowler and Sergio Garcia to the Claret Jug in 2014 at Royal Liverpool and altogether, he has won 21 times on the PGA Tour.

The former World No.1 has been a stalwart of the European Ryder Cup team, making six appearances, and he has achieved a host of distinctions on the PGA Tour, including leading the money list in 2012 and 2014 and winning the FedEx Cup in 2016 and 2019.

"I'm thrilled to become an Honorary Member of The Royal and Ancient Golf Club. It's a privilege to represent a club that has done so much for golf over so many years and I'm proud to play my part in promoting golf around the world," McIlroy said.

Paul Lawrie is one of European golf’s most successful and popular players over the last 35 years and memorably became Champion Golfer of the Year after coming from ten shots behind to win in a dramatic Open at Carnoustie in 1999.

He picked up his only major title at the expense of Jean van de Velde and in his career, he has won eight times on the DP World Tour and represented Europe in two Ryder Cups.

"I’m delighted to receive Honorary Membership of The Royal and Ancient Golf Club of St Andrews, particularly on the historic occasion of The 150th Open," said Lawrie.

"The Club has supported the development of the sport since its formation and continues to do so today. I’m honoured to accept this invitation and to do that alongside Rory and Tiger is extra special."