The Open: Cameron Smith jokes he won't cut hair even if he wins "brutal" major

Cameron Smith says he doesn't want to jinx himself ahead of The Open but he feels he is playing the best golf of his career. 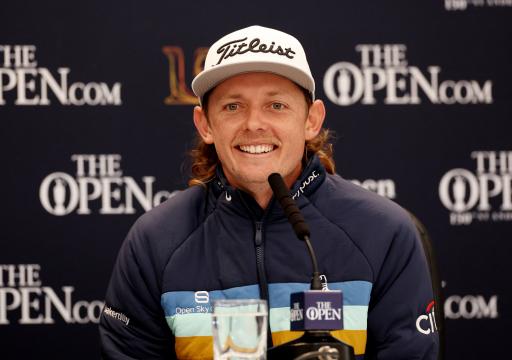 Cameron Smith has joked he will probably not be cutting his hair even if he wins the 150th Open Championship at St Andrews because he enjoys the fact it makes people smile.

Smith, 28, comes into the landmark major in good form off the back of the Genesis Scottish Open at The Renaissance Club with a top-10 finish.

He faced the media today after the chief executive of the R&A delivered an interesting take on the LIV Golf saga that has been dominating the golf chatter for months now.

Australian Smith has risen in the Official World Golf Ranking’s this season with some impressive performances, including a win at The Players Championship at TPC Sawgrass.

He also took down the Sentry Tournament of Champions with a record low score of 34-under par on the PGA Tour in Hawaii and now is occupies sixth position in the world rankings.

All this means that Smith is widely thought to be a factor at the Old Course. Although he concedes that it’s going to be extraordinarily tough to keep the ball on the dry, firm fairways this week.

“Links golf is trying to hit the perfect shot and hoping for the best,” Smith said.

He added: “The game plan, I think, has changed quite a bit over the last few days being here with the wind.

“Like I said, it's been so hard to keep the ball on the fairway that it's almost worth just hitting driver up into the rough and hoping you get a good lie and kind of play it from there.

“And at some points it will be unfair, I think. But you've just got to move on and I think deal with it as best you can and try and make those birdies when you can.”

Will Cameron Smith cut his hair if he becomes The Champion Golfer of the Year?#The150thOpen pic.twitter.com/EECcYdDQnY

More: Rory McIlroy "on a mission" at The Open, says Bjorn

Smith was asked if he would cut his hair off if he claimed his maiden major here.

He said: “I've always said that if I won a tournament or did something good, I would cut it off. And I've done that a couple times this year, and it's still on there.

“So I'd like to say I would cut it off, but it's probably not going to happen. I feel like it's almost a part of me now. Like you said, people recognize the hair and makes a few people laugh. Yeah, it's good.”

Does he get any interesting comments from the fans?

“There are some goodies from time to time. But for the most part I think people enjoy it.

“Like I said, I think they have a laugh at it. And it makes people smile, which makes me happy.”

Speaking of his own chances for a successful week, Smith added: “I think I've played the best golf of my life this year, for sure.

“So don't want to jinx myself, but I'm feeling pretty good. The game feels good. I had a good weekend up at the Scottish Open.

“It was good to see some putts drop and a couple of low numbers over the weekend. So, yeah, hopefully I can get it done.”