Tiger Woods slumps to 78 at The Open; is Friday his final round at St Andrews?

Woods found at the water at the 1st - and it was pretty much all downhill from there. 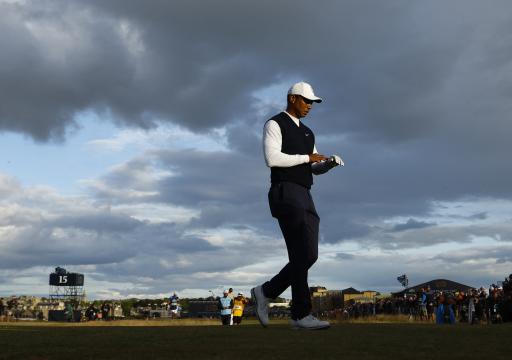 Tiger Woods slumped to a dismal opening round of 6-over 78 on day one of the 150th Open Championship at St Andrews.

Woods has made it no secret that the Old Course at St Andrews is his favourite track in the world and he was eager to make his first competitive start at the Home of Golf since 2015.

But despite optimism at the start of the week, the legendary American golfer who has etched his name on the famous Claret Jug three times (and twice at St Andrews in 2000 and 2005) already looks on from tied 146th and 14 shots off the early pace set by compatriot Cameron Young.

Tournament favourite Rory McIlroy got off to a superb start with a round of 66.

Woods started the round by finding a divot in the middle of the 1st fairway, and it led to his approach shot coming up well short into the water.

He took his drop and chipped up to three feet, but he would miss the putt and it was a disastrous double-bogey six to start the day.

Woods added further bogeys at the 3rd and 4th and then made a second double bogey of the day at the 7th.

He erased that quickly with birdies around the turn at the 9th and 10th but would then hand them back with bogeys at the 11th and 13th.

Not that he will care too much, but he did unleash the longest drive of the day at 14 with a 412-yard rocket with his TaylorMade Stealth Plus driver.

That would lead to a birdie, but he would hand it back at the 16th en route to a lacklustre round of 6-over 78.

In terms of a health update, Woods looked to be smiling through the pain, and perhaps realising the end really is nigh.

Woods, who was an unlikely outside 100/1 shot at the start of the week, now finds himself with plenty of work to do on Friday morning just to make the cut, which is likely to fall at 1-under par.

Should that prove to be the case, Woods will need to shoot a 65 or better just to stick around for the weekend.

Depending on how Woods performs on Friday morning, it could very well end up being his final ever round in The Open at St Andrews.

Woods is 46 years old right now and St Andrews is not next back on the Open Championship rota for another five years, at the very earliest.

That means he would be 51, and who knows whether or not Woods will still be playing golf come 2027.

Thankfully for Woods, he can return to play in The Open as a past champion whenever he wants.

The 15-time major champion made an incredible competitive return to the sport earlier this year at The Masters following his horror car crash in Los Angeles in February 2021.

Woods is still receiving plenty of rehab for not just his legs after his crash, but also his back, which has plagued the second half of his golf career.

Just being able to walk again without crutches, let alone play competitive golf, has been a huge feat for Woods this year.

"All things considered, where I've been, I was hoping I could play this event this year," said Woods after his round.

"Looking at it at the beginning of the year, end of last year when I was rehabbing, trying to see if I could do it, but somehow I was able to play two of the major championships in between then and now, which was great.

"But this was always on the calendar to hopefully be well enough to play it. And I am. And just didn't do a very good job of it."

The former World No.1 has always told the media he will only compete in a tournament if he genuinely believes he can win it.

Woods is not interested in making up the numbers.

But perhaps now, at 994th in the world rankings, Woods is starting to realise light is fading fast.

That was certainly the case during his opening round at least, as his group - and others - went round in just over six hours.

So is Friday going to be Woods' final-ever round at The Open?

Perhaps we will learn more when he strides off the 18th tee box and walks over the iconic Swilcan Bridge on Friday afternoon.

Let's hope it's not his last hurrah on golf's most famous links, but it could be...

Next Page: Phil Mickelson on what the R&A told him before the start of Open Championship week