Rory McIlroy after fast start at The Open: "I think I know what I'm doing" 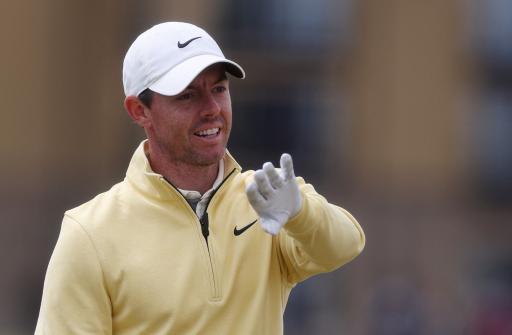 Rory McIlroy admitted it was “golf being golf” and not an attitude shift after he continued his impressive stretch of starting fast in the majors this year with an opening 6-under 66 at the 150th Open Championship at St. Andrews.

McIlroy, 33, got off to an absolute flyer when he drained a monster putt at the opening hole to a thunderous applause at the Old Course.

The Northern Irishman made three consecutive birdies from the fifth hole to make the turn in 4-under par. Another birdie dropped at No. 12 before he made his first bogey at 13.

He bounced back immediately and birdied the par-5 14th. Three safe pars followed, and he managed to finish strongly with another birdie at the iconic, drivable 18th hole.

“Yeah, I mean I did everything that you're supposed to do around St Andrews. I birdied the holes that are birdieable,” he said.

“And I made pars at the holes where you're sort of looking to make a par and move to the next tee. And didn't really put myself out of position too much.”

He added: “It's not like it's very, very easy out there. It's tricky. Some of the pin positions -- I think that's what they're going to do over the next few days.

“They're just going to hide the pins away and make it very hard to get close to some of them. And even today they did that.”

McIlroy found himself only two strokes behind the American Cameron Young, who fired a bogey-free 8-under 64.

Young hit all 18 greens in regulation in a breath-taking round that could’ve been better.

Does it surprise Young that he is so far ahead?

He told the media: “Not necessarily. I think it's always possible. I shot a million last week, and this week all of a sudden I'm pretty comfortable.

“There's been a lot of work and a lot of preparation in between, but I think things can change in an instant, especially out here given how important the bounces and the mindset that you have are.”

Elsewhere, Phil Mickelson said he was ecstatic in being here, but his demeanour did not show it.

Mickelson carded a level par opening round and later confirmed it was of his own volition that he decided not to attend the annual past champions’ dinner.

Tiger Woods got off to a disastrous start by finding the water with his second shot.

It looks like just making the cut will be out of reach for big cat, but we live in hope.

What about everybody else?

Cameron Smith is right there at 5-under. The young, English amateur Barclay Brown surprised himself and us all with a 4-under 68.

Kurt Kitayama, who went close at the Genesis Scottish Open last week, has started well too.

To the dismay of The R&A, LIV Golf players Lee Westwood (68) and Ian Poulter (69) have both started strongly.

But for McIlroy, is his start down to an attitude shift in the majors?

He told the media: “I think it's golf being golf. And I think I've played with a little more freedom because I can, because I'm in more control of my swing and my game.

“And I think it sort of goes hand in hand. I have confidence and I can go out and play free and not be maybe as timid and tight starting off.

“And as I said, three majors in a row now where I feel like that, which is a really nice feeling considering how I have felt previously at times.

“So, it's golf being golf in a way, but at the same time I'm in a better place with my game to go out there and give a better account of myself.”

McIlroy said he thinks he’s “pretty good at this game”.

“I've been playing well. I've been swinging the club well.

“And I think it's better if I don't think about it that much and I just go out and play golf and try to shoot some good scores on one of my favourite golf courses in the world.”