Golf fans left disgusted by the pace of play in the first round of The Open, as Tiger Woods' group go round in over six hours. 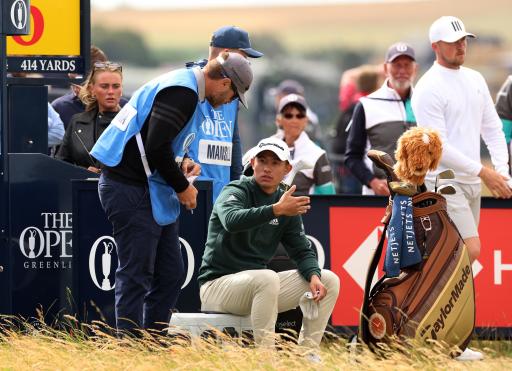 Golf fans were turned off by the pace of play in the opening round of the 150th Open Championship at St Andrews, on a day which saw Tiger Woods' group complete 18 holes on golf's hallowed turf in an astonishing six hours and nine minutes.

Just about every single group out there on the Old Course was clocking similar times in the first round.

The biggest culprit was the firm conditions rather than any individual golfers, so it was really nobody's fault other than the course setup.

Matt Fitzpatrick, who was playing alongside Woods and Max Homa, was not best pleased with the pace of play.

With the fairways running faster than the greens and a number of par-4s reachable from the tee, it meant a lot of waiting around for just about all the biggest hitters. You also have a number of shared greens at St Andrews, which always slows things down.

Most rounds of golf on the Old Course at St Andrews in the Alfred Dunhill Links Championship at the end of September, a tournament for pros and amateurs, will typically take between five and half hours and six hours.

But today was the first round of The Open, in three-balls and not fourballs like you see in the Dunhill Links.

That is just too long, at least in the eyes of the majority of golf fans watching The Open.

"This is bordering on farcical now. Outrageously slow play and Tiger's group past the six-hour mark," said an irate golf fan.

"It's an absolute disgrace, rounds of golf should never be taking six hours no matter the conditions," said another annoyed golf fan.

"6 hours Tiger Woods has been in the course?! FFS. there's slow play and there's bordering on the ridiculous," tweeted another.

"Slow play strikes again, it's become a complete joke to be honest," commented one fan.

"The pace of play is tragic today. Such a terrible example to give club golfers," said one golfer.

Defending Open champion Collin Morikawa was particularly fed up with it after his round took just over five and half hours to complete earlier in the day.

"I figured it would be slow, but I didn’t know it would be this slow," said Morikawa after opening with a level-par 72.

"We were waiting on groups at tees, waiting on fairways. Xander [Schauffele] and I talked about it, we’re watching more golf than we ever have.

"You stay in the fairway and you’re watching two other groups play golf."

McIlroy, who was playing alongside Morikawa and Schauffele, took it all in his stride with an opening 66.

"It’s quite stop-start but I think St Andrews is that way," said McIlroy, who is bidding to win his first major title since 2014 this week.

"So I think, especially the first two days when it’s the full field, it’s to be expected. It is what it is."

Next Page: Will Friday end up being Tiger Woods' final ever round at St Andrews?