Is this the unluckiest shot you will EVER SEE at The 150th Open Championship?

Haotong Li was out early in the second round of The 150th Open Championship and he experienced some poor luck with his approach shot to the 1st hole. 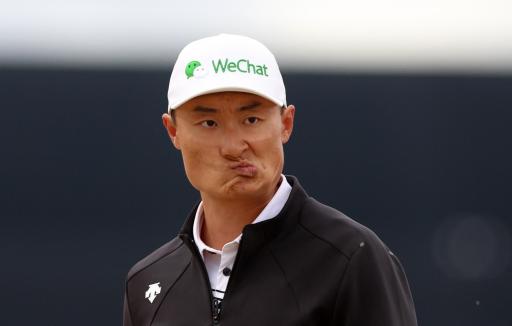 DP World Tour winner Haotong Li can wear his heart on his sleeve at the best of times, but his emotions were tested to the limits in the second round of The 150th Open Championship.

Li was in the middle of the fairway on the 1st hole early on Friday, looking to claw back his average score of 1-over-par from the first round on the Old Course.

His approach shot from 117 yards looked to be going straight at the pin, but instead, his ball hit the wall of the Swilcan Burn on the green side.

As you can see in the footage below, Li's ball cannoned off the wall of the burn and rolled backwards down the fairway. His shot only travelled a total of 44 yards.

You could argue his ball could've ended up in the bottom of the burn, but the Chinese player went on to make a triple-bogey, so this turned out to be a heavily unfortunate break.

It was not the first time Li has made a triple-bogey at St Andrews this week. On the short and easy par-4 9th hole, he made a seven after hitting a poor drive.

The 26-year-old has missed the cut in his last two appearances at The Open Championship and with conditions being softer with more accessible pins on Friday, he could be looking at a hattrick of missed cuts as other good scores could swallow him up.

Five years ago, Li earned his best ever finish of third at The Open. He carded a final-round 63 at Royal Birkdale to finish behind eventual winner Jordan Spieth and runner-up Matt Kuchar.

He won his third DP World Tour title at the BMW International Open at the end of June. This was his first win on the old European Tour since the Omega Dubai Desert Classic in 2018.

Next Page: Rory McIlroy after fast start at The Open: "I think I know what I'm doing"