Phil Mickelson was asked about not attending the Champion's Dinner on Monday multiple times, so much so that the 2013 Open champion lost his cool for a few seconds. 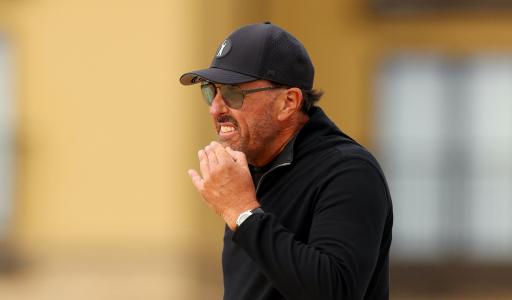 Six-time major champion Phil Mickelson briefly snapped at a reporter at The 150th Open Championship when he was repeatedly asked about the Champion's Dinner on Monday.

Mickelson revealed that he and the R&A came to a mutual decision that he shouldn't attend the Champion's Dinner at St Andrews, which saw the likes of Jack Nicklaus, Gary Player, Tom Watson and Tiger Woods attend.

Due to his commitment to play in the LIV Golf Invitational Series, Mickelson cuts a decisive figure in the golf world now and he didn't hold a press conference ahead of the first round at the Old Course.

When Lefty was pressed on the matter of his Champion's Dinner absence, he grew impatient with one reporter who seemed to repeatedly aim their questions on the subject.

Related: Phil Mickelson on what the R&A told him, and his respect for Tiger Woods

“Let it go dude, let it go… I couldn’t be happier” — Phil to a reporter following his opening round 72. pic.twitter.com/AmEVXDi0T0

"Let it go, dude. Let it go. That's three times you've asked the same question. I don't know what to tell you. I couldn't be happier," Mickelson responded.

"The R&A contacted me a couple of weeks before and said, look, we don't think it's a great idea you go, but if you want to, you can," is what the 52-year-old had already said on the matter.

"I just didn't want to make a big deal about it, so I said fine. We both kind of agreed that it would be best if I didn't."

Mickelson opened his week at the home of golf with a level-par 72. He made three birdies and three bogeys and he will likely need to improve on this if he is to make the cut.

He didn't make the weekend at the US Open last month in Brookline and he has been largely disappointing in his two appearances in the LIV Golf Invitational Series.

Next Page: Is this the unluckiest shot you will ever see at the 150th Open Championship?