Darren Clarke claimed his second Claret Jug with a one-stroke victory at The Senior Open at Gleneagles. 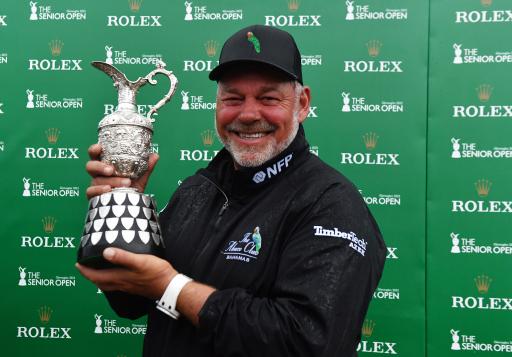 Darren Clarke likely reacted in the only way he knew how after claiming a second Claret Jug at The Senior Open.

The 53-year-old had just got his hands on the coveted trophy and he was asked what he was going to pour inside it after his victory at Gleneagles.

The Northern Irishman left it late as he birdied the 72nd hole to claim victory by one stroke over Padraig Harrington.

It meant he became the fourth man in history to claim both The Open and The Senior Open. He joins esteemed company in Bob Charles, Gary Player and Tom Watson.

Clarke, who became the champion golfer of the year in 2011, carded nine consecutive pars before dropping his only shot of the day at the par-5 10th hole but he bounced back at 12 with a birdie.

Then there came a two-hour rain delay in Scotland. At the 18th hole, a par-5, he almost reached the green in two and needed two putts to win the major.

His long range putt was expertly judged and he tapped in from two feet in the pouring rain.

Harrington's blistering back nine on his way to a 67 ensured that he secured his third runner-up finish in senior major championships this season.

Clarke said: "I've made no secret of the fact that I wanted to win this more than anything. From when I turned 50, this is the one you wanted to win, so I could set it beside the other one. [This is a] pretty good feeling right now."

Next page: Was Justin Rose taking a dig at the European LIV players?