Is Justin Rose taking a dig at the LIV Golf players with this photograph?

Justin Rose has posted an interesting photograph on social media which could potentially be seen as a dig to the Ryder Cup Europe players who have defected to LIV Golf. 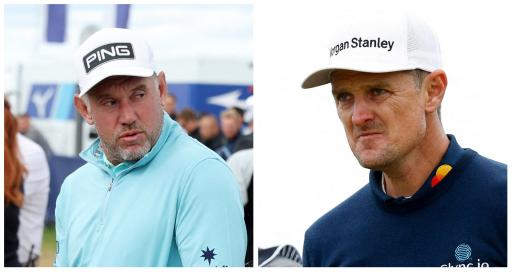 We may be reading a little bit too much into this but Justin Rose's latest social media activity could be a bit of a dig at the ageing Ryder Cup Europe players who have defected over to LIV Golf.

Rose, 41, posted an interesting photograph on his Twitter page this morning. It shows the Englishman wearing a Ryder Cup Europe shirt and enjoying a coffee on a glorious summer morning, checking his phone.

He captions the post: "If Carlsberg did Sunday mornings..."

Whether or not this is a dig at LIV players, most notably Stenson, we'll that up to you.

However, it could very well perceived to be an intentional shot at the likes of the ageing European icons who have decided that their professional golf futures lie on the Saudi-backed series, spearheaded by Greg Norman.

If Carlsberg did Sunday mornings….. pic.twitter.com/dHFbcYSAyV

What has happened this week in LIV?

He will make his debut at the third 54-hole tournament of the series' inaugural eight-event season.

Because Stenson has decided to play LIV Golf events, he was stripped off the Ryder Cup Europe captaincy, an honour he was given in March.

The Swede, 46, claimed he had set up a deal with LIV so he could fulfil his obligations as the skipper but clearly this did not sit well at Ryder Cup Europe HQ.

Rose very much fits the profile of someone who could potentially be playing LIV in the future.

But the Englishman reportedly feels as though he has unfinished business and wants to win on the PGA Tour again and tick off another major before he retires.

Rose was forced to pull out of the 150th Open Championship at St Andrews through injury.

In the past, he has made no secret of his love of playing in the Ryder Cup and was reportedly furious that he wasn't chosen to represent the Europeans to play at Whistling Straits last September.

Captain Padraig Harrington chose Shane Lowry ahead of him.

Next page: Fan picks up Nelly Korda's golf ball during final round of major