Tiger Woods breaks down how to play the relatively easy 300-yard fairway bunker shot in this hilarious old advert. 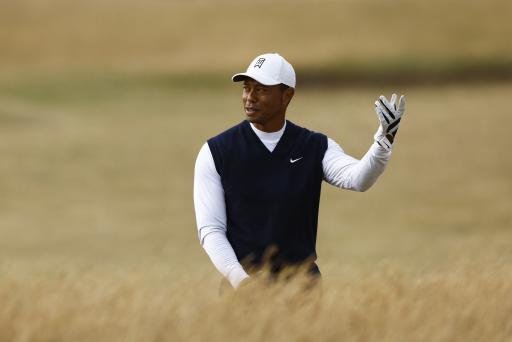 An hilarious advert featuring a young Tiger Woods has surfaced.

And it's fair to say he makes the game look incredibly easy as he gives tips on one of the simpler shots in golf: the 300-yard fairway bunker shot.

You can watch the advert below. Woods is decked out in his Nike gear as he steps into the bunker.

Like I told you guys, golf is actually really easy. Keep it simple like this video demonstrates. pic.twitter.com/GY5oq4FRBX

More: Phil Mickelson welcomes Feherty to LIV... from the jungle

When will Tiger Woods play golf next?

Woods, 46, claimed after playing the 150th Open Championship at St Andrews that he had no immediate plans to play pro golf any time soon.

He's taking a break from the game after he exhausted efforts to play in three of the four majors in 2022.

He made the cut at the Masters, limped out of the PGA Championship after 54 holes and missed the cut at The Open.

The 15-time major champion decided to skip the U.S. Open so he could prepare for the landmark major in Scotland.

When he strode up the fairway at the 18th hole at the Old Course he was reduced to tears.

Woods previously claimed he had no plans to retire, suggesting he would be back to play in future Opens.

It is highly unlikely that he will be able to participate in the next Open at the home of golf when it returns.

Most recently, Woods was pictured playing golf in Spain with his son Charlie Woods.

Next page: Tiger drops outside top 1000 after The Open