Adam Scott wanted to move on from making a quadruple bogey at the 2022 Players at the 18th. But then the rain came. 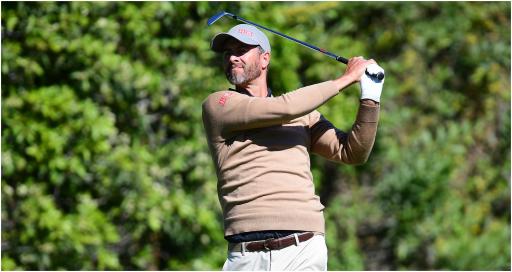 Adam Scott has fond memories of The Players. Afterall, he won this tournament back in 2004.

But this is a moment the Australian will want to forget. Scott sent not one, but two balls in the water at TPC Sawgrass's 18th.

Scott was playing the back nine first and was actually 1-under par before he hit his tee shot at the 456-yard par-4.

But by the time he walked off, he was 3-over at the turn as he signed for a catastrophic quadruple bogey.

Then to add insult to injury, this was all before the klaxon came signalling for the players to get off the course.

A dangerous weather warning on day one of the 2022 Players forced the competitors off for more than four hours.

More: The shocking averages of the elite at Sawgrass's 17th

So Scott, 48, had to sit on that disgusting quad all that time. This can be a cruel game at times and doesn't Scott know it.

The former Masters champion found the fairway with his fifth shot after two nearly identical drives.

His first shot actually travelled 297 yards according to shot tracer, but it didn't quite have the legs. So did his third shot.

His sixth, from 150 yards, found the dance floor. He two putted from 18 feet for the quad.

This was actually the second time in six years Scott has made a quadruple bogey at the same hole.

The last time he did this was during the opening round of The Players in 2016. Pain.